I was at my survey site in northwest Cumbria again yesterday, and thankfully it wasn't fog bound like the last time I visited, just a tad murky with no Scotland visible. It was however a great morning's birding, well I thought so anyway!

I had clear skies with a 10-15 mph southeasterly wind, and perhaps a little bit stronger at times, when I set off on my transect walk and later VP watch. Birds were on the move straight away, and the direction of passage varied between and within species. Some individuals were flying down wind in the strongish wind, heading anywhere between north and east, which is to be expected in the spring, whilst others headed south in to the wind to gain lift. In fact some of the southwards heading birds dropped in front of the cliff face to get shelter from the easterly element of the stiff southerly.

Chaffinches headed north as expected, but my notebook only records three, and this was because I could hear birds but couldn't see them, so there was obviously more. A couple of Reed Buntings headed north and they weren't phased by the brisk tail-wind either. Meadow Pipits seemed to employ both strategies; nine headed NE and two south into the wind.

The Siskins and Goldfinches were some of the more interesting movers during the morning with most of them heading south and below the cliff top, to gain shelter from the wind...I think! I had 28 Siskins and 16 Goldfinches.

Later in the morning I heard Crossbill calling and looked up and saw a flock of twenty birds heading south. I just assumed that one, or perhaps two birds, had latched on to some Goldfinches or Siskins. I lifted my bins to count them and was surprised to see all twenty were Crossbills, and a mix of gorgeous red males and green females!

As I was packing up at my VP watch point I heard the familiar honking behind me of Whooper Swans, and fifteen birds headed due west out to sea. I thought this was an odd direction as they were heading straight for the Ards Peninsula in Ireland, but they then turned and headed northeast in to the Firth. 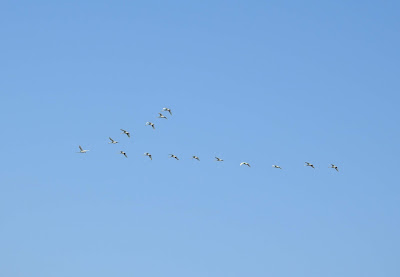 The Skylark flock had reduced in number that have been over-wintering in the stubbles, and this morning all I had were 29. A few Skylarks were also on the move and six headed purposefully north. Two Grey Partridges were nice to see, and one of the two male Stonechats I had was giving some song. In addition to the two males I also had a female. 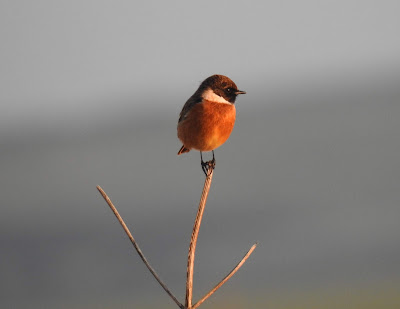 Raptors were represented by two Kestrels, a female and a male, and a male Peregrine that motored past me carrying prey. Two Goldcrests were definitely new in, but the two Rock Pipits on the edge of the cliffs had been around all winter. 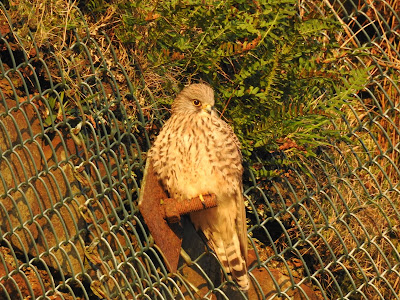 The sea was quiet and all I had was a Fulmar, a Great Crested Grebe, four Auk sp., three Red-throated Divers, a Guillemot, six Common Scoters and interestingly a male Goosander.

So all in all a good job of work and an enjoyable morning's birding!
Posted by The Hairy Birder at 21:48