I wasn't expecting to be posting again until the end of the week, but as you might have guessed from my blog title I had a Red Kite this morning. "So what", I can hear you say, "Red Kites are everywhere now"! But, not round here they ain't.

I was surveying closer to home this morning and I wasn't really expecting much. It was a grey old morning, with full cloud cover and 15 mph southerly wind. I was stood at my vantage point mapping the various species flying overhead when I noticed a long-winged, fork-tailed raptor slowly drifting west. It was of course a Red Kite and it was quite high. I tried to get a few shots, but they were awful, and it fairly quickly drifted out of camera range. It occasionally circled, before recommencing it's drift west. After a couple of minutes it was lost from view. 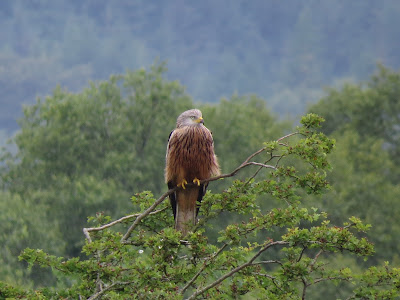 A proper Red Kite above (Dumfries & Galloway), and my blurry spec of
a record shot of all record shots below! 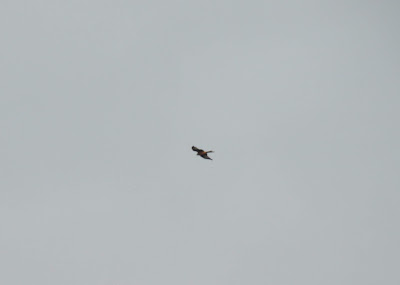 Of course I have seen lots of Red Kites in my time, but this was only the third I had seen in Lancashire, and the first in the Fylde area of Lancashire. Besides being a scarce bird still in these parts, I still get a buzz from seeing Red Kites as I remember a time when the only place you could see them in the UK was in Wales!

I had a few other raptors this morning in addition to the Kite, including a female Sparrowhawk, a pair of Kestrels and two Buzzards. One of the Buzzards was receiving a great deal of attention from the local Herring Gulls, and I had to smile because if there ever was a villain of the bird world the Herring Gull would be a good contender!

I didn't really have much else other than a singing Song Thrush, twelve Chaffinches, 33 Goldfinches, a Grey Wagtail, 100 Common Gulls, two Teal and three Long-tailed Tits. Whilst I was on the phone to Gail a Woodcock flew from one area of woodland to another, so that was the best of the rest after the Kite.

Fingers crossed for something equally as good when I am out later in the week.
Posted by The Hairy Birder at 21:01