I can't quite believe that it's been nearly a month since I posted, and for some bird species we are already moving from winter to spring. However, before we get to spring I need to rewind back to winter.

I had some work to do on some of the southwest Lancashire mosslands, and on a very cold and crisp day in late January Gail and I set out on a 5-6 mile round trip on foot photographing some habitat features for a report I was writing.

One of the main features of the mossalnds is the network of drainage ditches, as a great deal of the land is actually at or below sea level, and the ditches are required to keep the intensive farmland well-drained. Some of the ditches are 'managed' on a regular basis with bank sides trimmed and silt removed annually. However, some aren't managed as intensively, and it was in one of these ditches where we came across two Little Egrets.

Corn Buntings are scarce now, so it was both pleasing and sad to come across a single bird perched on some overhead telegraph wires: where else? A number of winter stubbles are retained on the moss and we came across a flock of 70 Lapwings in one of them. Twelve Skylarks, 40 Meadow Pipits, ten Goldfinches, 30 Linnets and two Reed Buntings were other users of the stubbles.

Two groups of Whooper Swans, 427 and 110, were nice to see, as always, and a Peregrine terrorising Woodpigeons flew the flag for raptors. 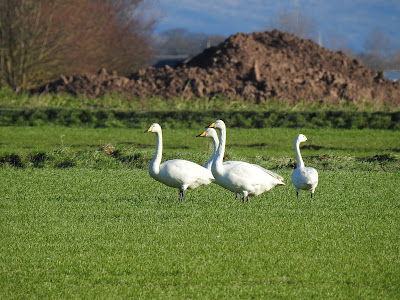 On 31st January winter returned with a vengeance, but it was a short-lived vengeance, as these cold snaps often are in these worrying days of climate change. I had a site visit in northwest Cumbria, and as I headed north along the M6 in the pre-dawn darkness I watched my car thermometer drop. I called in at Tebay services at 6:30 a.m. for a coffee, and it was a decidedly chilly minus 12!

As I motored on towards the Cumbrian coast the temperature rose and as the day dawned I could see that the Lakeland fells were carpeted in snow.

I think I might have mentioned before but my survey site includes some coastal arable fields that are currently stubbles, and 91 Skylarks in them was impressive. Three Song Thrushes and three Stonechats (two males and a female), also made it in to my notebook from the terra firma bit of my survey site.

Over recent visits it has been quiet on the sea and all I had during this survey was four Common Scoters, two Shags, a Guillemot, two Red-throated Divers, two Auk sp. and five Kittiwakes.

The number of Fulmars on the cliffs had increased to 29 and a female Merlin perched on a fence was the highlight of my visit.

Last week I had a survey closer to home in the north of the county and the site comprises mainly of intensive grassland, hedgerows and a couple of small woodlands. I noted a nice flock of 92 Common Gulls on some pasture with Black-headed Gulls, a definite sign of spring for me.

I was back at my northwest Cumbria survey site yesterday and there was a few signs that winter is slowly slipping into spring. The main feature of the morning was the movement of Pink-footed Geese northwest across the Solway to Dumfries and Galloway. In total I had 727 in six skeins, and all were high and motoring northwestwards. 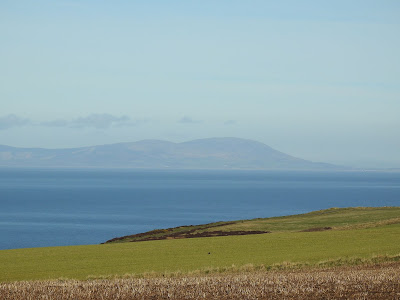 Looking towards The Criffell in Dumfries & Galloway; aka God's own
country!

The stubbles still contained the large Skylark flock, and today I counted 117, along with a couple of Grey Partridges. Another scarce farmland bird these days! Birds have been singing for a few weeks now and every day I keep adding new songsters to the list, and this morning was no exception with the addition of displaying Rock Pipit!

Fulmar numbers on the cliffs had dropped to 17, but I did have a female Peregrine in the area too. Other raptors recorded were restricted to a Buzzard and a female Kestrel. The pair of wintering Stonechats were still present, but they wouldn't come close enough for a photograph.

Bringing you right up to date I was out surveying at one of my farmland wintering bird survey sites in Cheshire this morning, and thrushes were the order of the day. Under the cold grey conditions I had 92 Fieldfares and 77 Redwings. They were associating with Starlings in varying numbers, but my finally Starling tally, courtesy of a single flock of 800, was 1,008.

A new songster for me for the spring was Yellowhammer, and I had a further two individuals fly over during my walk. Other bits and pieces in the hedgerows were three Song Thrushes, seven Long-tailed Tits, a Great spotted Woodpecker, two Tree Sparrows and two Reed Buntings.

Surprisingly the maize stubbles held a few interesting birds; a flock of 60 Linnets (they have been around all winter), 32 Snipe and five Skylarks. Other than a fly-over Grey Wagtail and four Buzzards that was it.

Over on the right I have updated the ringing totals for Fylde Ringing Group up until the end of January. Unfortunately I can't claim any credit for any of the birds ringed!

Fingers crossed and weather permitting I've got another three days of bird surveys this week. I'll let you know what I see.
Posted by The Hairy Birder at 21:37