A Smattering Of Farmland Birds

It was Cheshire again for me this morning and my farmland wintering bird survey site to be more precise. The weather was glorious with clear skies and a light southeasterly breeze.

As I drove along the track to the site I was greeted by two Buzzards perched up in a tree right next to the track! Where was my camera? In the boot of course! It is a good site for Buzzards and I added a further three on my walk round.

The hedgerows and hedgerow trees are starting to fill up with birds and it is always a pleasure to record Long-tailed Tits, five this morning, and singing Yellowhammer, plus a site first in the form of a Treecreeper was nice.

The Yellowhammer was part of the smattering of farmland birds that I recorded this morning and other members of this group included six Skylarks, three Stock Doves, a nice flock of 80 Linnets, three Tree Sparrows, four Lapwings (including one displaying), a female Reed Bunting and a singing Song Thrush. 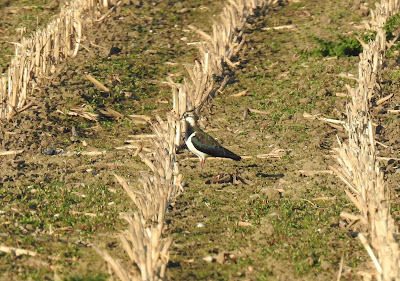 The numbers of Fieldfares have dropped since my last visit, and this morning I only recorded nine. I have mentioned before the Snipe that unusually, unusually to me anyway, roost in some maize stubble, and this morning when I walked this particular field I pushed up 24! I tried scanning ahead to see if I could see any of them on the ground, but without any success. 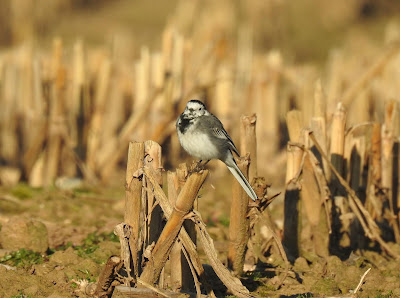 A number of Pied Wagtails were also in the maize stubble

It's a good old fashioned early alarm call tomorrow for me, somewhere in the region of 4:00 am, to head north to northwest Cumbria. Let's hope that it isn't foggy again!
Posted by The Hairy Birder at 16:00