Steady was the only word I can use to describe the seawatching this morning. It wasn't brilliant but neither was it poor. The wind remained a steady 20 mph west-northwesterly all morning and the squally showers out to sea never made it to shore.

Passage on or over the sea included 47 Cormorants, a Kittiwake, four Common Scoters, 16 Gannets, two Common Terns, 12 Red-breasted Mergansers in one flock and two Fulmars. There was a steady movement of Sandwich Terns in to the bay that were tricky to count and then all of a sudden Ian picked a huge flock over the shingle island and we estimated about two hundred. They had obviously been flying in to the bay and landing on the island on the far side out of site. A raptor or a Skua must have then put them up bringing them in to view. 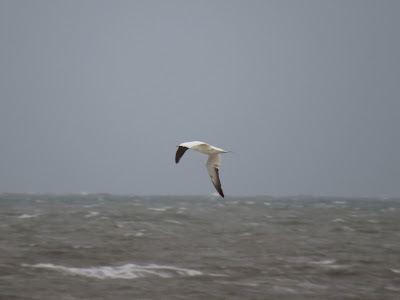 Gannet - it's a pity you can't see its head!

After just over two hours I decided to go and count the waders roosting on the beach and I counted eight Curlews, 13 Oystercatchers, 145 Turnstones, 19 Ringed Plovers, 45 Dunlins and 27 Sanderlings. 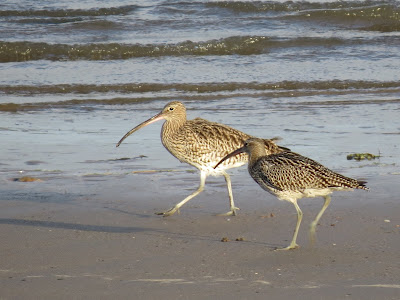 Surprisingly I did have a grounded migrant this morning in the form of a Stonechat, but there was absolutely no visible migration other than sea birds of course!

It's still going to be fairly windy tomorrow, but after that high pressure is going to be in charge for a couple of days which will get some passerines on the move and hopefully I'll be able to do some ringing at the obs.
Posted by The Hairy Birder at 11:58