It was crystal clear this morning and the view from the southern part of the Obs recording area was panoramic to say the least. Standing on my seawatching/vis observation spot and looking east I could see the Bowland Fells, Ingleborough in the Yorkshire Dales and then moving north the Lakeland Fells,out west the Isle of Man and then to the southwest Anglesey and Snowdonia; stunning! Perfect for visible migration you might think, but no the vis this morning wasn't what the conditions would perhaps dictate and was a touch light. 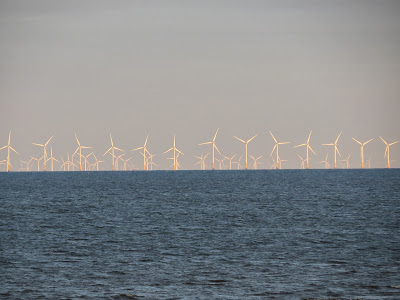 The number of turbines seems to be increasing

At first light I had two oktas cloud cover with a 10-15 mph westerly wind. I couldn't detect any grounded migrants this morning other than perhaps the eleven Robins I counted on my walk round. There was some vis but as I have already stated it was confusingly light. I counted six Alba Wagtails, 17 Linnets, 52 Meadow Pipits, 21 Skylarks, a Grey Wagtail, a Snipe and a Chaffinch. Interestingly all the Skylarks were heading in to the wind and ultimately out to sea and then turning round and heading back to dry land! 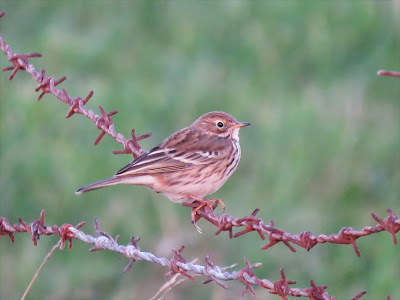 I had a brief look on the sea and recorded 25 Cormorants, 16 Common Scoters, 16 Pintails, a Gannet, twelve Auk sp., four Eiders, a Sandwich Tern, three Great Crested Grebes, a Razorbill and a Shelduck.

Back home I checked the moth trap and I had two Silver Ys and a Blair's Shoulder-knot. The forecast is looking very similar for tomorrow with cloudy skies and a stiff southwesterly breeze/wind. More birding for me and I'll be sure to let you know how I get on. 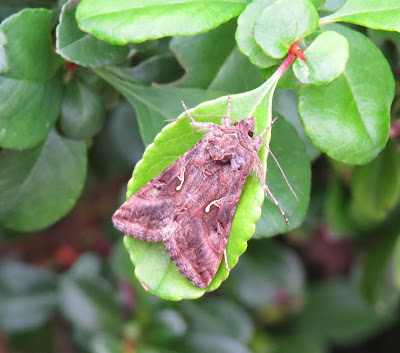 Silver Y
Posted by The Hairy Birder at 20:47