Lull After The Thrush Storm

I didn't think that Thrush lightning could strike three times, never mind twice, but in the pre-dawn darkness there seemed to be good numbers of Redwings on the move based on the number of calls I could hear. As dawn broke at the Obs I could see that there were a few Redwings grounded/exiting temporary roosts, but certainly not on the move. In total all I had were 27 Redwings, a fraction of the birds that have been moving through over the past couple of days.

I had full cloud cover this morning with a 20 mph NE wind that had a touch more easterly in it, but perhaps not as much as an ENE. I think I could be splitting hairs there! It was fairly clear to the north with good views across the bay to the Lakes and out to the east I could make out Bowland but it was murky.

There was some 'vis' this morning but it was incredibly light and was restricted to seven Alba Wags, seven Meadow Pipits, a Reed Bunting, a Rock Pipit, three Carrion Crows, 15 Linnets and nine Greenfinches.Grounded migrants were even thinner on the ground with just two Wheatears and nothing else. Raptors were limited to a single Kestrel and only 60 Pink-footed Geese dropped into the fields to feed. 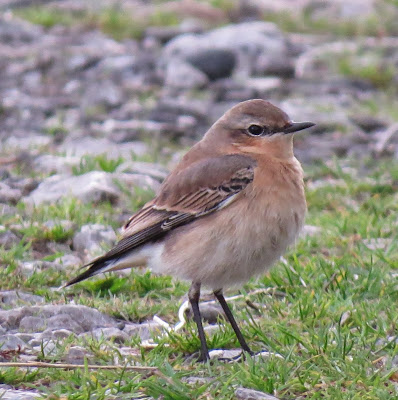 One of the two Wheatears this morning

I have a latish night tonight as I'm off to see Deep Purple, but I will make the effort and get out in the morning even though the forecast is giving more of the grey stuff with a moderate northeasterly wind. Mind you it is October and you just never know!
Posted by The Hairy Birder at 14:12

I was hoping for an October Wheatear here this Autumn Seumus, but the likelyhood is fading now. Enjoy the music tonight :-)

Wheatears are so cute.. Great image..

Thanks Warren and Ana. Purple were awesome by the way!