I missed the spectacular arrival of Redwings yesterday, not because I was working, but because I was out scouring the north of England for birthday presents for Gail's birthday next week! Interestingly I was outdoors in places like Orton, Sedbergh and Kirkby Lonsdale in Cumbria but didn't hear a single Thrush. There were some impressive movements yesterday and I know Ian had about 7,000 go through over the Obs.

This morning I decided to allow myself an hour and a half or so before hitting my desk and spending the rest of the day report writing. As the wind was quite strong and from the northeast I decided to have a look at the estuary and the areas of scrub around the old railway line as I knew it would be sheltered there and there would be the chance of some feeding Thrushes left over from yesterday.

As I walked along the path through the Hawthorns I could hear Redwings calling and as I got the near reservoir where it was more open I could see birds heading NNE in to wind. Not huge numbers but I did have 110 Redwings and two Song Thrushes.

I walked across the saltmarsh to have a look on the estuary and count any wildfowl. The tide was fairly high as it was only a couple of hours past high tide and it was just starting to drop. On the estuary were 1,297 Pink-footed Geese, 112 Wigeons, twelve Whooper Swans and 58 Teal. Walking back across the salt marsh I put three Rock Pipits up and single figure groups of Meadow Pipits and Chaffinches headed south. 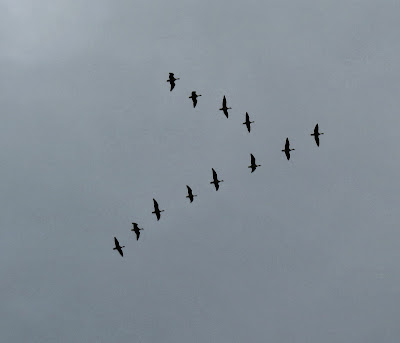 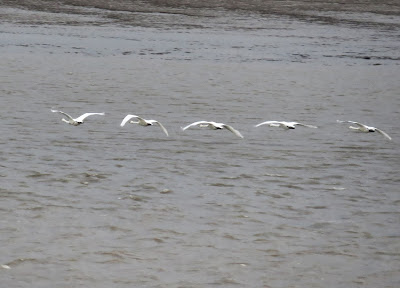 I had a look on the reservoir and there was a decent number of Little Grebes totalling 15 with twelve Coots and seven Tufted Ducks. Heading back towards the railway line I had a Chiffchaff calling and giving some bursts of sub-song and I also heard a Brambling, my first of the Autumn.

I bumped in to Ian who was trying to catch and ring some of the Redwings and he had just caught one so I ringed that. It was then time to head home and glue myself to my desk. 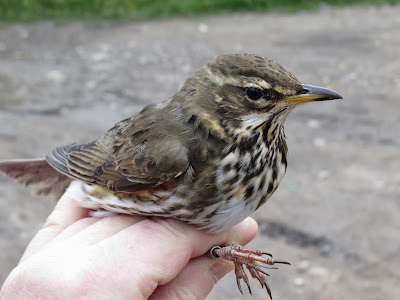 Back at home (I live just over a km from the coast as the Fieldfare flies) I was taking my boots off at the back of my car when I heard some Redwing and Fieldfare calls and a number were heading north. Instead of going straight to my desk I spent about half an hour in my garden counting Thrushes and I had 215 Redwings and 70 Fieldfares head mainly north, although some did head west. A quick text from Ian late morning said that Thrushes were still 'pouring' N-NE. It's unusual to have two 'big days' of Thrush movement, but looking at the forecast with the winds from the northeast we could have a few more days of arrivals. I'll be sure to be out in the morning looking!
Posted by The Hairy Birder at 12:32

Even here at my inland patch I had impressive numbers of Redwing going over yesterday Seumus :-)

No Fieldfare yet though!

Yes it's been a heck of a movement. The Fieldfares are on their way to you Warren.