It was calm enough to do some ringing at the obs this morning, but yet again the forecast of the previous evening was for it to be a good deal windier than it was! At first light I had complete cloud cover with a light SSW wind.

I did my usual walk around the patch and it was fairly quiet. There were very few grounded migrants around, or at least they weren't obvious (quite a few Dunnocks, Robins and Wrens; but were they migrants?), other than three Song Thrushes that spiralled out of the sky and a single calling Goldcrest in the dunes.

Visible migration was similarly lack lustre with just four Alba Wags, 26 Meadow Pipits, four Chaffinches, twelve Starlings and a Reed Bunting. 'Other' birds included just 14 Pink-footed Geese dropping into the farm fields to feed, a single Kestrel flying the only raptor flag and a flock of 26 Greenfinches in the Japanese Rose patch. 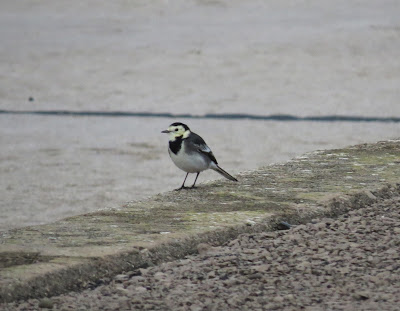 Out on the sea the best bird was a male Velvet Scoter drifting out on the falling tide. In fact the only other bird I had on the sea other than two Cormorants was a single Guillemot and a 'none bird' in the form of an Atlantic Grey Seal.

I'm not sure yet what to do in the morning as the weather is a bit iffy and being a bit of a 'petrol head' I want to watch the Japanese Moto GP and Indian F1 GP. I'll have to give it some thought and consult the weather Gods!
Posted by The Hairy Birder at 17:54