..........seemed to conspire against me this weekend leading to no birding yesterday and very little this morning. I attempted to bird my patch twice yesterday but each time I aborted because of heavy rain.

This morning when I got up it was dry but I could see cloud cover developing. By the time I was at the southern bit of the obs it was raining slightly. However, I set off on my walk and tried to make the most of it, but an hour in to my walk the heavens opened and I had to make a hasty retreat. 'Sod's law' dictated that back home the cloud cover would break and the sun would come out and it did!

Back to my wet relatively birdless walk then. At first light a few Fieldfare and Redwings were going over heading south and this was all I had on 'vis' other than four Meadow Pipits, 15 Alba Wagtails, a Reed Bunting, two Greenfinches, a Linnet, two Chaffinches, a Grey Wagtail and some Starlings.

The Starlings were perhaps the most interesting facet of the morning and I had 2,750, made up of five squadrons, come in off the sea and head in an easterly/southeasterly direction. The Pink-footed Geese I had this morning were all heading north and I had 480 in total. 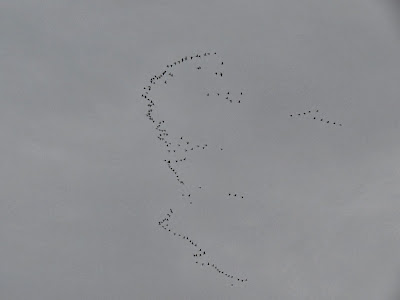 By the time I got to my seawatching position, that isn't sheltered at all, the rain was really coming down and I headed back to the car and home.

It's looking  a bit mixed weatherwise for the coming week although the wind is forecast to remain generally from the southeast and it will remain warm. I have got a bit of time this week so I will try and get out on a few mornings. I'll let you know how I get on.
Posted by The Hairy Birder at 13:04

Ooooh! Just for one of those PFG here seumus!

I didn't realise that you didn't get them in your neck of the woods Warren. I suppose thinking about it they don't get any further south than Norfolk.