It was a return to the brownfield site in the south of my region for me this morning, and what a glorious morning it was as I headed south down the M6 at 5:00 a.m. The weather was equally glorious at my survey site with clear skies and a light northeasterly breeze.

I was keen to find out what was happening with the Little Ringed Plovers (LRP). I got out of my car and stood in front of a mound to give some background to my outline, and scanned with my scope. It seemed quiet at first and I thought "had they gone", but then I picked up one, then a second and then a third, and a breathed a sigh of relief. 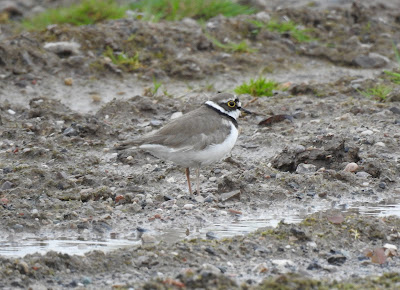 I decided to change position to get the sun behind me and have a proper systematic look across the site. As I headed round to the other side to stand in front of a hedge, again to give some background to my outline, I could see a large Lapwing chick and the adult alarm called when it thought I was too close.

In position I started scanning left to right and I immediately picked up a LRP chick, probably about 4-5 days old. It was running around feeding, gleaning invertebrates from the ground and the surface of vegetation. An adult approached it and it dived underneath the adult to be brooded, meaning to get a warm! This chick started feeding again and it joined two of it's siblings, looking quite comical on their out of proportion long legs. Even though it was nice, it was still early and still cool, so the adults were periodically brooding the youngsters.

Scanning further right I picked up another chick and an adult, and again it was being brooded every so often. I couldn't see any other chicks with this adult, but there was another adult further back so there could have been chicks with this bird.

Continuing my scan right I picked up an adult LRP 'sitting' on eggs. As I watched the other adult came in with short runs, stop, listen, short run, stop etc. The sitting bird then got up and the other adult settled down on the nest scrape.

Scanning right some more, I picked up another adult on eggs, so that was at least four pairs. I didn't check the extreme east of the site as I didn't want to disturb the four pairs that I had found! So, there could easily have been a fifth pair as there was enough habitat. Little Ringed Plovers are given special protection under Schedule 1 of the Wildlife and Countryside Act, and I had to be licensed to visit the site.

With all my attention on the LRPs I sort of kept my eye off the other birds using the site. Having said that the reason for the survey in the first place was that it looked suitable for Little Ringed Plover. The other bits and pieces of interest that I had were a singing Yellowhammer, Whitethroat, Lesser Whitethroat and Blackcap.

There was also good numbers of Common Blue butterflies, and I must have had at least 30 in area of grassland when I walked back to my car. 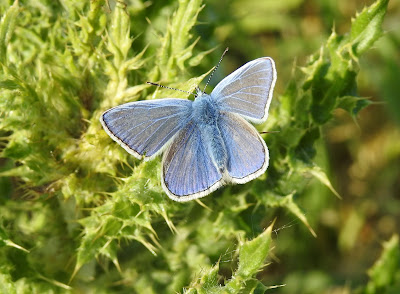 I'm northward bound tomorrow, to that National Park in Cumbria with the mountains in it. I'll be glad to heading north again because on my way back this morning the M6 northbound was shut because of an accident and the hour and twenty minute journey took me three hours!
Posted by The Hairy Birder at 19:20