At weekend one of the bird related things that I had to do was for me and Gail to carry out the first check of our Pied Flycatcher boxes. As this didn't require an early start I decided to do this on the Sunday as I was going to be out, and indeed I was out, on my nephew, Aidan's, stag do Saturday night. So Saturday morning I headed to the Obs for a bit of seawatching.

A few real ales Friday evening prevented me from getting there at the 'crack of dawn', but by 0620 I was in position, scope set up and looking at the sea. Skies were virtually clear with a light southerly breeze, but by 0850 cloud cover had increased to 5 oktas and the wind had swung round to a northwesterly direction and picked up a little.

My first view through my scope was of mayhem! Manx Shearwaters and Sandwich Terns everywhere, and my thoughts were "how on earth was I going to count this lot" and "do I count the Terns or the Manxies first"? It was most certainly 'Manxie madness' out there. 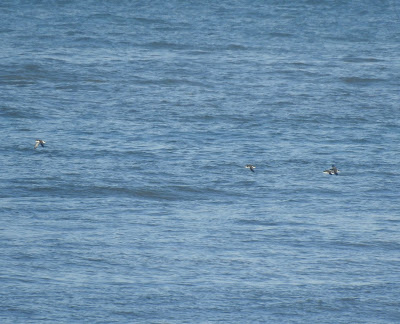 The Manx Shearwaters were constantly moving west out of the Bay, with only a handful doubling back to head east. In addition to this westerly passage was a raft of about 300 birds that would occasionally lift of the sea if disturbed. I have never seen anything like this off the Fylde coast in 42 years of seawatching! I can only assume that there was a plentiful food source in the Bay that they were feeding on in such large numbers.

With all the action on the sea monitoring the vis at the same time was tricky. From the vis perspective the best record was that of a female/immature Marsh Harrier that Ian first picked up a long way out at sea slowly heading south. Sadly it never came close and when it headed south it remained offshore!

Other bits and pieces of vis included 151 Swallows, two Tree Pipits and four House Martins. I didn't get chance to count the waders roosting on the beach and I could see that they were continually getting kicked around by the inconsiderate dog walkers (note I said 'inconsidrate', as there are plenty of considerate dog walkers that come and chat to us and are keen on wildlife). Whizzing past I had 129 Dunlins and 35 Ringed Plovers. 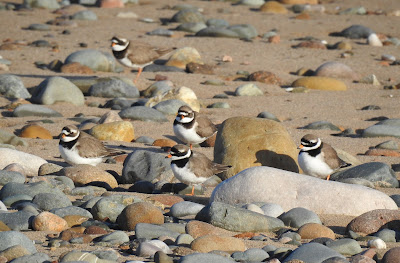 Sunday morning saw Gail and Me checking our boxes in the Hodder Valley in Bowland. At this particular site we have 39 boxes, and out of the 39 the occupation was of five Blue Tits, a Nuthatch, six Great Tits, six Pied Flycatchers and two Bee sp.! This means that nineteen were empty, so there is still time for some late Pied Flycatchers to set up home! I managed to lift three female Pied Flycatchers off the nest; two were new birds and were therefore ringed and the third bird was a recapture and she was originally ringed at this site in 2016 as a chick. 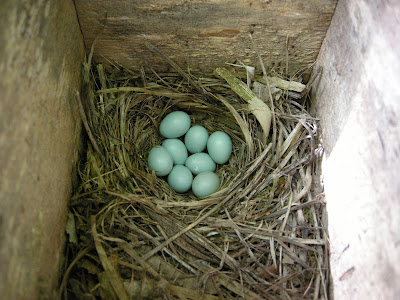 I've got breeding bird surveys most days this week, in fact every day other than Friday, so I'll be a bit bleary eyed by the end of the week!
Posted by The Hairy Birder at 20:29