Birding In The Kingdom Of Rheged

Most of the week I have been carrying out bird surveys in the former Kingdom of Rheged! Outside of natural history one of my interests, when I have time, is history, and I have my better half Gail to thank for this because she is a real history buff and drags me round lots of historical sites, but not kicking and screaming as I enjoy it!

Rheged was the Britonic speaking region of what is now northern England and southern Scotland during the post-Roman and early Middle Ages era, and as I was in north Cumbria overlooking the Solway with sweeping views to Dumfries and Galloway I was firmly in Rheged. Interestingly I read in a recent copy of 'Current Archaeology' about an excavation of a fort at Trusty's Hill near Gatehouse of Fleet.  Analysis of the artifacts found at this site in the context with other sites and their finds suggest that the Kingdom of Rheged was centred on Galloway early in the 7th century!

Anyway enough history, let's get back to the birds. My first survey was at a site in north Lancs, so not technically in Rheged, although some scholars think that Rheged covered the whole of Lancashire as far south as Rochdale based on place names.

The forecast for this particular morning was pretty good; light cloud, coupled with light winds and not the 'pea-souper' of a mist that engulfed me as I got out of my car. In fact wayward weather forecasts would become a feature of the week! I was at this site for two and a quarter hours and the mist/fog remained stubborn and didn't shift. Luckily I was surveying hedges, so it was less important that I could see far, my ears were the important tool.

I also had six Brown Hares and you can see a murky photograph below that gives you and idea how foggy it was! 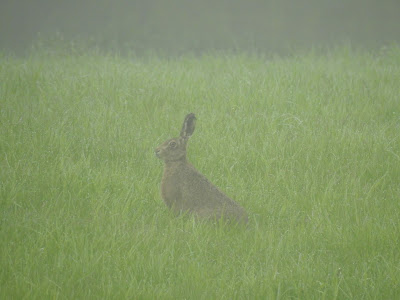 This isn't out of focus, nor had my lens steamed up, it's a Brown Hare in
the mist! 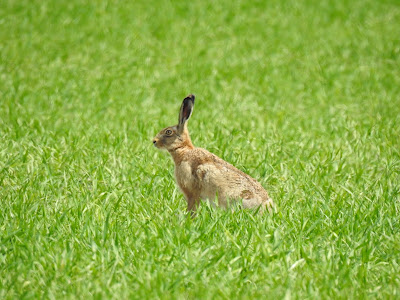 This is what a Brown Hare should look like when it's not foggy!

Wednesday morning saw me surveying some plantation woodland near Dalston in north Cumbria. Another bland but reasonable forecast of light cloud and light winds. When I arrived at the site it was raining! My BBC weather app. for the area said 0% chance of precipitation! The rain lightened to a light drizzle, and it was just possible to do the survey. If the forecast had said that the weather would have been like this I wouldn't have got up at 3:30 a.m.!

In the drizzle I managed to commit to paper five Willow Warblers, a Chiffchaff, a Blackcap and a Stock Dove. So, very quiet!

Thursday morning I was at another plantation woodland survey site with stupendous views over the Solway to Dumfries and Galloway, with the Criffel dominant in the landscape. I was truly in the heart of Rheged here. It was a glorious morning with clear skies, light winds and surprisingly a ground frost! 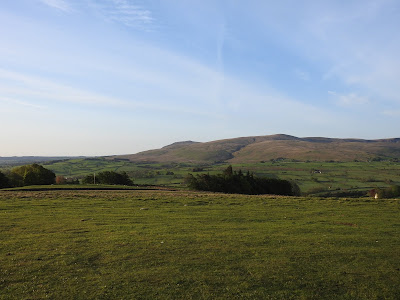 Looking back to the North Lakes (above & below) 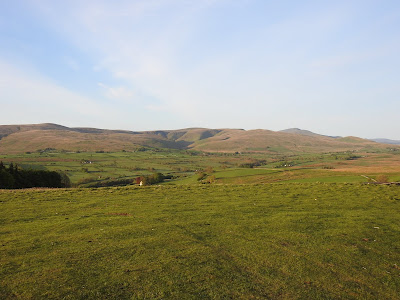 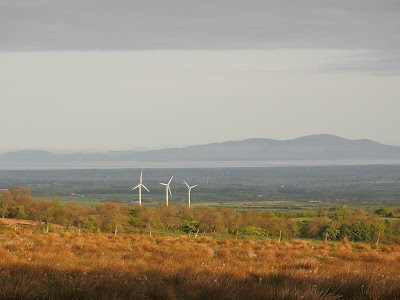 When I could keep my eyes off the views I recorded eleven House Sparrows, two Mistle Thrushes, two Great Spotted Woodpeckers, a Stock Dove, two Blackcaps, a Chiffchaff, three Tree Sparrows, a Song Thrush, a Jay, a Garden Warbler, a Goldcrest and a Song Thrush.

It's back to my nest boxes this weekend, so at some point I'll let you know how we got on. Hopefully some Pied Flycatchers will have arrived; fingers crossed!
Posted by The Hairy Birder at 20:51