Certain species have been giving birders cause for concern this Spring with their lack of numbers and/or lateness of arrival, and Swift is one of them. Others include Swallow, House Martin, Sand Martin, Whitethroat and Reed Warbler. What the Hirundines and the Swift have in common is that they are aerial feeders and need flying insects during their migration back from Africa to sustain them.

This morning I was doing the second of a Breeding Bird Survey (BBS) in north Lancs and I had a few Swifts, thirteen in fact. And this is by far my largest count this Spring.

I also had a few House Martins, nine, and four Swallows. Just a single Whitethroat, one of the other missing species, and a single Chiffchaff took care of the Warblers. Best of the rst included a Great Spotted Woodpecker, a singing Song Thrush, four Mistle Thrushes, a Kestrel, four Lapwings (two displaying) and three Oystercatchers. The most numerous species I recorded during the BBS was Jackdaw with a count of 41. 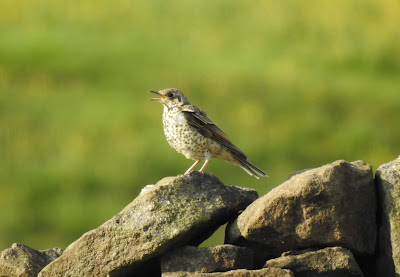 I'm Cheshire bound tomorrow, so more of that later if I see anything interesting.
Posted by The Hairy Birder at 18:09