On Saturday morning I decided to have a walk around the coastal farm fields at the school as it has been at least a week since I was last there. I had full cloud cover with a light southeasterly wind. About an hour in to my walk it felt cooler and the wind had switched to the northwest, and when I looked on the sea it was murky!

What a difference a week makes! In the last seven days Spring has suddenly arrived and I touched on this in my last post. There were a good number of migrants around, just how it should be. Sometimes it can be difficult working out what is grounded, or which birds have arrived at their breeding grounds and are in the process of setting up territory, there is a difference. For example at this site on 29th April I had two lesser Whitethroats; grounded migrants or breeding birds? The site is suitable for breeding Lesser Whithethroats, but as I had none this morning the birds on 29th were obviously grounded migrants and on their way through.

So, back to Saturday morning and grounded migrants included five Whitethroats, eight Sedge Warblers, four Wheatears, a cracking male Whinchat and a Chiffchaff. Yesterday was the big arrival day, so little could be expected of today. 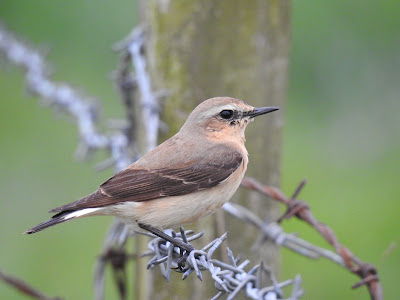 Due to the murky conditions there was very little vis other than 14 Swallows, a Linnet and two Sand Martins. Slow indeed! As you might expect the sea was very quiet too with just 300 Knots heading southwest, a male Eider, seven Cormorants, three Sandwich Terns and two Common Scoters.

Offshore were two Atlantic Grey Seals and one of them was eating a large prey item. I couldn't tell what the prey item was other than it looked like a large flat fish of some sort. Whatever it was it was attracting the attention of the local Gulls!

Back home I checked my moth trap and it was quality rather than quantity with a stunning Angle Shades, well I think they are stunning anyway, an Early Grey and a Common Quaker. 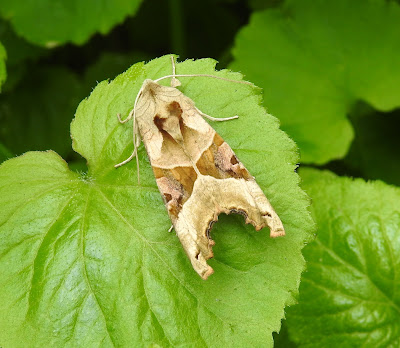 I was a bit of a lightweight this morning as I decided to have a lie in. Yes, I know it's Spring and I should have been out, but six mornings on the bounce with 4:00 am alarm calls meant that I needed a lie in. It all kicks off again tomorrow as I try and finish the last of my first BBS surveys.

I did run my moth trap last night, but it was quiet with just four Hebrew Characters and a Light Brown Apple Moth. I'll let you know if I have anything interesting on my survey tomorrow!
Posted by The Hairy Birder at 19:56