Starting The Week Amongst The Trees

I was north Cumbria bound this morning, for one of my woodland bird surveys. I have three in this area and I always look forward to them because I enjoy the drive once I leave the M6, and more particularly the views across the Solway to Scotland!

I had 6 oktas cloud cover with a light southeasterly wind when I set out to survey compartment one. Three Willow Warblers tried to out-sing each other and I missed a golden opportunity to get some great photos of probably a female. She was skulking around along a hedge and then she perched up out in the open on a strand of the wire fence. I pointed my camera, looked through the view finder and could see the male Lesser Redpoll I had photographed earlier! I had been reviewing my photos and left it on the same setting. By the time I had switched it over, it or she was gone. I think there's a lessen to be learned here. 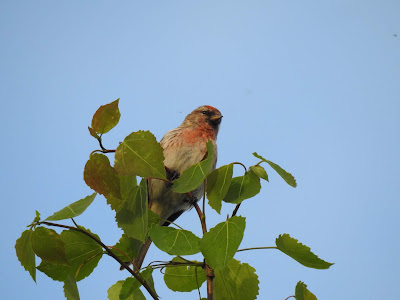 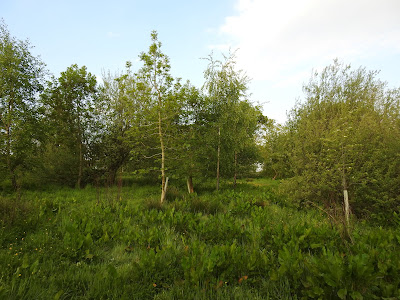 The trees in compartment one

The only other songster in this compartment was a male Lesser Redpoll, who was displaying more than singing. He was flying from tree top to tree top, with a quivering flight and trilling at the same time. Beautiful!

A single Tree Sparrow on some telegraph wires was noteworthy, as was the singing Yellowhammer off site.

Compartment two was graced with two singing Willow Warblers as well, but they were joined by two singing Blackcaps. Two Tree Sparrows and a female Bullfinch were good to record, and I think the Bullfinch was a new record for the site.