Earlier in the week the forecast looked quite interesting for Saturday (18th) morning; an easterly wind with a weather front moving north, that potentially could bring some rain in before first light. Thoughts of a fall occurred! However, by Friday evening the forecast had changed, and the weather front was likely to stall around Cheshire, and peter out. In fact, creating a 'blocking' effect for migrants, and this is what happened.

I took my walk around the coastal farm fields again, and as soon as I started to walk along the sea wall, I knew it would be quiet; no Wheatears! At this time of year Wheatears are quite a good barometer for grounded migrants, and a lack of them along the coast normally means a lack of grounded migrants generally.

Having said that it is Spring, and even though I would class it as a 'trickly Spring' as far as migrants are concerned, it means that some migrants will still trickle through, and yesterday was a case in point.

I stopped for a sea watch and there was some movement at sea including 39 Sandwich Terns, 20 Gannets, 35 Common Scoters, three Cormorants, ten Shelducks, two Red-breasted Mergansers, a Great Crested Grebe, two Arctic Terns, a pair of Eiders, an Auk sp. and a Red-throated Diver. 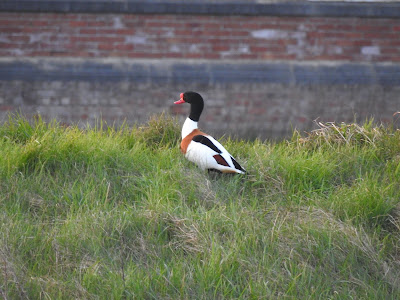 A male (above) and female (below) Shelduck stopped off briefly, probably
looking for suitable nest sites. 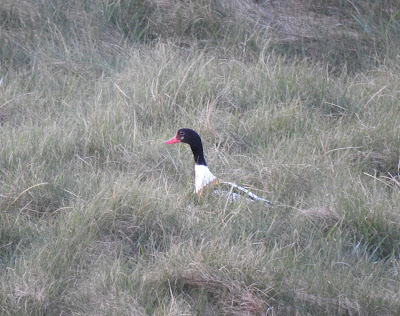 At this time of year there are always waders moving at sea, and I had eight Whimbrels head north and 200 Knot head south. An Atlantic Grey Seal again, was a pleasure to see.

The best bird I had at sea was a Hooded Crow. I picked up a bird about half way out, heading south, and I thought "what's this, it looks a bit like a Hoodie". I zoomed up my scope, and sure enough it was a Hooded Crow heading south rather purposefully. I watched it south until I lost it, and it never came any closer to shore. Where it was from, or where it was heading to, I'm not sure. Whether it had come from Ireland/western Scotland/Isle of Man, and was heading to Wales, is a possibility.

On my way home I called in very briefly at the Cemetery. As soon as I stepped out of my car, I could hear a Redstart calling. I headed to where the call was coming from and just caught the glimpse of a male flying away, and over in to the bordering gardens. Two Willow Warblers also made it on to the trickly Spring grounded list!
Posted by The Hairy Birder at 20:34