I had a new species of moth for my garden in the moth trap this morning, in the form of a beautiful Ruby Tiger. From the picture below it is easy to see how it got its name. The further south the redder they are, and the further north the browner/drabber they are. They can be found in flight by day, but they also fly from dusk and into the night. 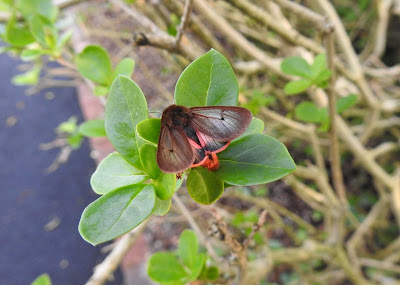 I took my daily well-being walk on the farm fields at the southern end of the Obs recording area, and it was most certainly dreich! In fact, pre-dawn I was a bit excited about the dreich conditions, as I hoped that they might have dropped in a migrant or two, but no.

I only had a quick look on the sea, because it was so dreich that you couldn't really see anything. So, I was actually amazed that I managed to record four Eiders!

I didn't have any grounded migrants apart from a single Willow Warbler!

Ah well, I'll just have to keep looking skywards in the garden in the hope of a decent raptor over!
Posted by The Hairy Birder at 14:52