It's about a week since I had a garden mega, in the form of a Wheatear, and I mentioned the lockdown garden birding competition I was taking part in run by Steve at North Downs & beyond. What I didn't tell you was how many bird species I have recorded so far since the competition started on 20th March.

I have recorded 40 species in, on or over my garden since 20th March as follows:

The competition is going to finish on 7th May, to coincide with the end of our second lockdown period. Even if the lockdown period is extended beyond that date, the competition will still finish then. There are a few species I know that are to come, but what's missing? What should I have recorded since 20th March based on previous years? Species I would have expected to have recorded include Cormorant, Black-headed Gull, Great Black-backed Gull, Sand Martin, Wren, Grey Wagtail, Pied Wagtail and Tree Pipit.

On 19th April I recorded a new species of moth for the garden, a Swallow Prominent, and what a stunner it was. See pictures below. 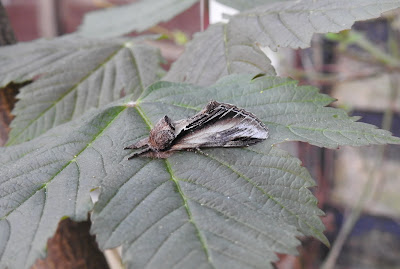 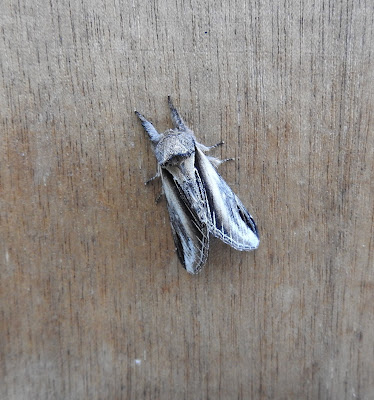 In fact, that was the only moth in my light trap that morning. Since then it has been very quiet, because it has been very cold at night, and this morning all I had was a single Hebrew Character.

I didn't have anything in my moth trap yesterday, because I didn't run the trap, as I was out on a bird survey for work, and there wasn't much to report there either.

The trap will be getting switched on shortly, so fingers crossed for some moths in the morning, and might be able to report on some breeding wader work later in the week.
Posted by The Hairy Birder at 19:44