I am one of those people that can't work from home, because the majority of my working time is spent carrying out Ecological surveys, and in the main bird surveys. In addition to this, any survey work that I do for planned development has been classed by the government as essential work.

Yesterday, I had a bit of a survey escape to one of my client's farms, and as I have mentioned before on his Bowland farm I am carrying out a long term survey of the wetlands that he has created, and in addition to this, yesterday's survey also included a walk up to the land managed for breeding waders to see how they are getting on. If any management is required to improve the habitat for breeding waders, these management tweaks will need to be completed at the end of the breeding season for obvious reasons.

So, I had 300 ha, or 3 million square metres, or 600 football pitches to myself, and it was a glorious morning of wall to wall sunshine, with very little wind.

From a breeding wader perspective there was plenty of Lapwings, Curlews, Oystercatchers and a  few Snipe all holding territories. The Oystercatchers were very much associated with the wetland corridor through the centre of the farm, the Curlews on some of the 'rougher' higher land, and the Lapwings on some of the more intensively managed grassland. Lapwings like a short sward, and on some of the land managed for Lapwings I thought they were a tad under-grazed, so that's a tweak to carry out later in the year; graze these areas quite hard in late summer, so that the sward height is right for the following breeding season. 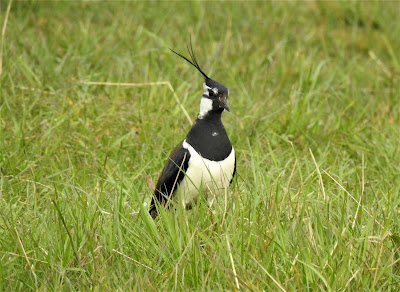 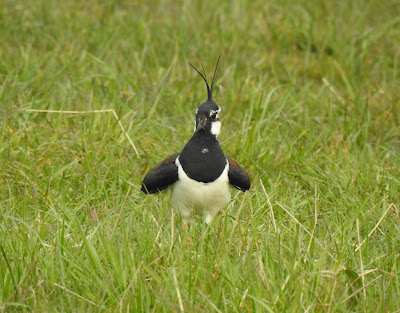 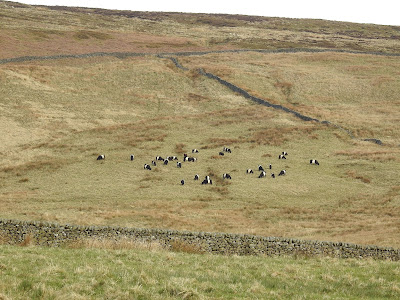 They're not humbugs on the hillside, they're Belted Galloways used for
conservation grazing

This farm is great for Brown Hares and I must have seen at least twenty individuals on my walk round; magic! As I wandered along the wetland corridor, mapping and counting, I came across two pairs of Stonechats; one close to one of the relatively new pools, and another on an area of unimproved grassland, that is in fact a Biological Heritage Site (BHS). 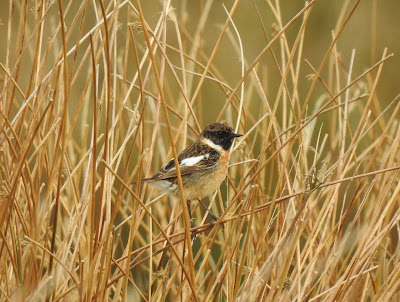 Tufted Ducks breed on the farm, and there are between four and six pairs. A Redstart called from an area of woodland close to one of the 'Tufted' wetlands, and I also had at least twelve singing Willow Warblers from various hedges, copses and small tracts of woodland.

One of the highlights of the morning were two singing Cuckoos, and I managed to see one of them after it flew, being mobbed by Meadow Pipits. I thought it ironic that one or two of these Meadow Pipits will be duped by the female Cuckoo a little later, when they inadvertently raise a Cuckoo chick!

The best of the rest included three Reed Buntings, a Grey Wagtail, three Siskins, a Buzzard and a Tawny Owl.

The moth trap has been very quiet of late, although I did have a new species of moth for the garden this morning in the form of a Lychnis. Sadly, I couldn't get a photograph of it, as when I released it on to some vegetation at the front of my house, it roosted on the under-side of a leaf and I couldn't get any shots! I think that's called Sod's law! It's a belting looking moth, so Google it and have a look. They don't usually appear until mid-late May, so this was an early one.

I'll call it a day now, and go and switch my moth trap on, and pour myself a cold beer!
Posted by The Hairy Birder at 20:54