I was hoping to be able to report on a quadruple-header, as earlier in the week, based on the forecast it looked like I might get out ringing at the Obs reedbed Thu, Fri, Sat and Sun...if only!

During the first part of the week there was a lot of thundery weather around, and the three forecasts that I use, we've talked about these before (BBC, Met Office and XC), weren't forecasting these weather systems with any confidence. The plan was to get out Thursday morning, and when I watched the thunder storm in the early hours I didn't hold out much hope of getting out. Fast forward to 4:30 a.m. and it was still raining, so it was back to bed!

I managed to get out on Friday morning and today, with Alice and Graham, but it is likely that it will be too breezy tomorrow. I've lumped the ringing totals together for the two days (8 and 6) as it was so quiet, so 14 birds it was for both days as follows:

Plenty of quality, but lacking in quantity! 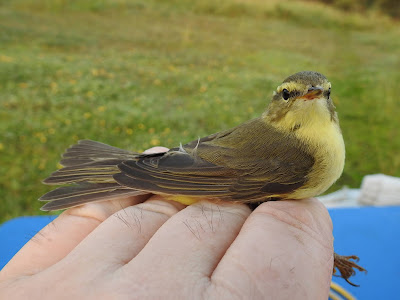 Early on yesterday, as I was putting the nets up at 5:30 a.m. I heard a calling Yellow Wagtail, and at such an early hour it must have been coming out of an overnight roost in the reedbed. In previous years, though not for some time, we have ringed Yellow Wagtails with roosting Swallows.

Between net rides, when sat at the back of my car, I kept on hearing Sandwich Terns but couldn't see them. Eventually I picked up a 4,1 & 5 flying over high from the estuary, and heading northwest.

The only vis I had was a single Tree Pipit over, and we didn't have any vis today. In fact, if it was possible, today was even quieter than yesterday, and the best bird from a birding perspective was a 'reeling' Grasshopper Warbler.

It's mixed messages again for tomorrow from the various weather forecasters, so I will have to study them again later over a pint of real ale!
Posted by The Hairy Birder at 18:06