...when I didn't get to bed last night until nearly midnight, is a very good question that I asked myself several times this morning when staring out to see and seeing next to nothing!

There was a tide this morning, so last night I decided that I would have a look at the tide this morning and see if there was anything moving. By 5:15 a.m. I was stood in front of the tower at the Obs under full cloud cover, with a fresh westerly wind. And as I have already hinted at, it was quiet. 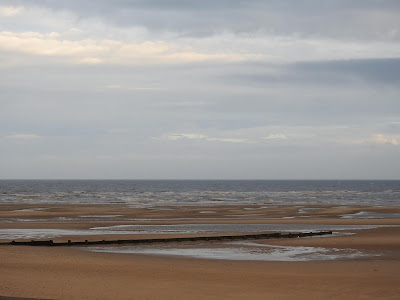 Looking northwest, above, and northeast, below, you can see that the tide
had a way to run in. 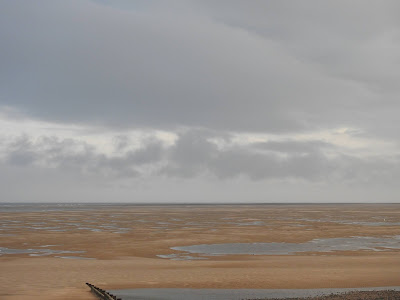 I have written in my notebook that it was a bit murky out to sea, with the wind turbines only just visible through the murk and that was the problem. The murk had more or less locked the bay down, and not very much was motoring in or out. If you are really that interested, I can tell you that I had 84 Common Scoters, six Shelducks, five Sandwich Terns and two Cormorants, and that was it.

As I had given up long before the tide ran in, waders were at a premium, and all I had were ten Curlews, 35 Oystercatchers and 41 Sanderlings.

If you thought that was bad, the vis was even quieter with just three Swallows west....eek! A nice spangly, fresh, juvenile Stonechat along the edge of the dunes must have fledged locally, and a flock of 32 House Sparrows on the edge of the golf course was noteworthy.

On my way home I called in to have a look on the scrape, and sadly there was no waders. On the main pool were 21 Coots, eight Tufted Ducks, six Little Grebes, a Moorhen and twelve Mallards. So, you can see why I asked why did I get up at 4:30 am!

A few days ago, I was trying to photograph bees in the garden again, and managed to snap the Western Honey Bee below. At least it adds a splash of colour! 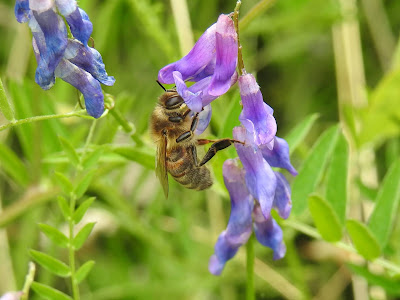 Talking of my garden, we had three Hedgehogs in our Hedgehog feeding station last night; an adult and two young ones.

Over on the right you will notice that I have updated the ringing totals for Fylde Ringing Group up until the end of July. Below you will find details of the top 5 ringed during July, and the top 10 'movers and shakers' for the year.

Six new species were ringed for the year in July and these were Siskin, Greenfinch, Treecreeper, Cetti's Warbler, Buzzard (new species for the group) and Tree Pipit.

Top 10 Movers and Shakers for the Year

So, not much movement at the top of the table, but plenty of movement lower down. There's a slight chance that I might be able to add to these totals on Monday, but failing that it could be Thursday before it's fit to get out ringing at the Obs again.
Posted by The Hairy Birder at 20:35