When I set off to the pools to meet Alice this morning my car thermometer showed 6 degrees Celsius, but it certainly felt colder than that. And the evidence on the ground showed that it most certainly was colder than that, as in the shade some of the leaves on the vegetation had a coating of frost!

The other thing that it felt, was quiet, and I must admit I didn't expect that we would catch very much. For the previous few days, it had been northerly, quite a strong northerly, and overnight and into this morning the wind had dropped, and it was clear as well. The combination of a light northerly airstream, low temperatures and clear skies are the ingredients of what I like to call a clear out morning. Any birds that had been held up by the unsettled week this past week, would have been most certainly on the move last night.

Undaunted by this rather bleak prognosis, that proved to be spot on, we continued, and put just two nets up. In the reeds and Willow scrub it was quiet, very quiet in fact, with very little calling. I don't actually mind this, as it is part of the magic of migration monitoring, and whether it is hooching with birds, or whether it has the feel of an avian desert doesn't really matter, as each scenario tells a different story.

The Starlings are still roosting, and approximately, well who knows how many thousands exited the roost shortly after first light. I have put ten thousand in my notebook, but this really was a guess. As I have already mentioned, because it was a 'clear out' morning it was difficult to tell whether there were any grounded migrants; a couple of Willow Warblers called, and two or three Whitethroats fed on Elder berries in the sunshine. 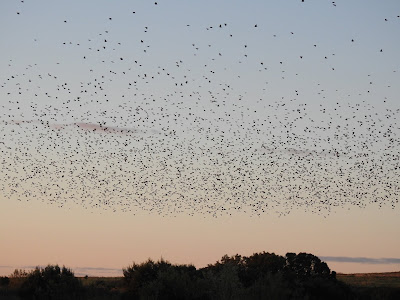 One or two Starlings (above & below) 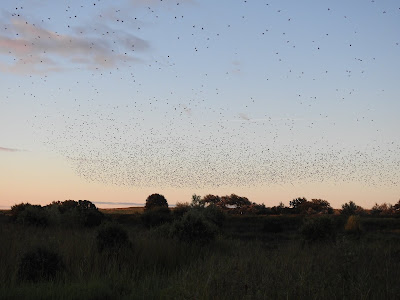 We ringed just four birds; two Reed Warblers, a Blackcap and a Robin. So, I suppose there were one or two migrants around! 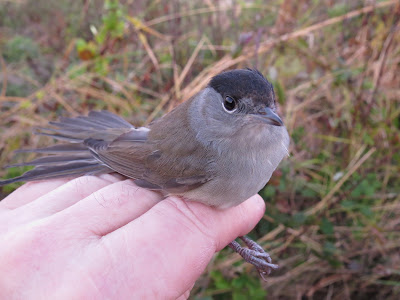 I didn't detect any vis, other than a steady passage east throughout the morning of Swallows in ones or twos. If there was anything else it could well have been up in the 'stratosphere' beyond the range of my hearing. It's also a funny time of year, that short period between the departure of British summer migrants and the arrival of continental migrants.

Some alarm calling Swallows gave a Sparrowhawk away as it flew off carrying prey, and a single Redshank thought about landing on the scrape, but only thought about it!

I can't quite believe that I have written all the above about, well virtually nothing really, but as I am fond of saying it is always a pleasure to be out. In fact, we are going to do it all again tomorrow, but it's going to be cloudy overnight and into the morning, with the wind swinging round to the southeast. So maybe.....

I have just pulled a notebook off the book shelf from 2015, and I was out ringing at the same site on this day then, and it was quiet too. We ringed just eight birds; a Lesser Whitethroat, three Reed Buntings, a Linnet, a Reed Warbler and two Wrens. So maybe it is just the time of year!
Posted by The Hairy Birder at 19:29