It's decidedly dreich this morning, but yesterday wasn't, so I headed down to the estuary, and as the days are shortening as we move towards the Autumn equinox, I don't have to get up as early, so a 5:30 a.m. alarm call didn't seem too bad.

It was a glorious morning with only one okta of cloud cover, but the wind was a tad chilly as it came out of the north. Northerly winds generally don't produce the goods from a birding perspective, well not in the west on the Fylde peninsula they don't, but they do produce good, clear visibility, with that cooler, denser air.

As I walked down towards the estuary, along the footpath through the 'Hawthorn tunnel', the usual avian suspects accompanied me in this scrubby habitat, with calling Great Tits, Blue Tits, Wrens, Robins, Blackbirds and three Willow Warblers. 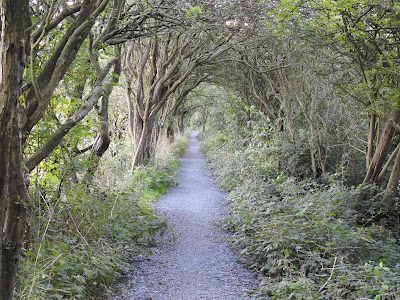 I crossed the old railway line and emerged on the path alongside the estuary. Straight away I had a calling Whimbrel and half a dozen Curlews. There's something about the calls of both these related species, that really evokes wild places. In both its breeding and wintering haunts, Curlews occupy wide open and wild places; moorland/upland areas during the breeding season, and estuaries and coastal areas during the winter. 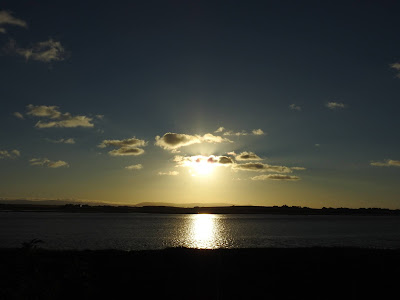 As I headed upstream along the footpath, I had a look on the reservoir and there was just a Grey Heron, eight Little Grebes, two Moorhens and three Mallards. As I crossed the first muddy creek, I inadvertently flushed a Little Egret, Redshank, Common Sandpiper and two Curlews that were feeding in the creek. 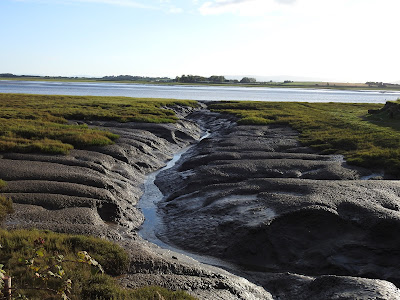 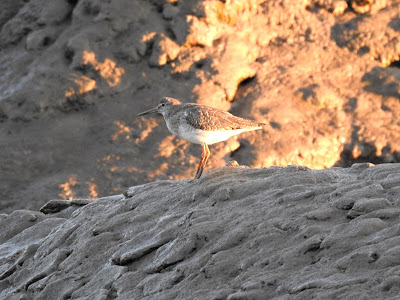 Further upstream the falling tide had exposed an area of mud that was swarming with feeding Redshanks. It was the first suitable, and sizeable feeding area that was exposed, and the Redshanks were taking advantage of it. In fact, I had 427 Redshanks on the estuary in total, with 263 of them on this area of exposed mud. 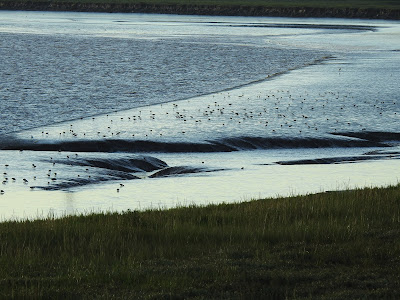 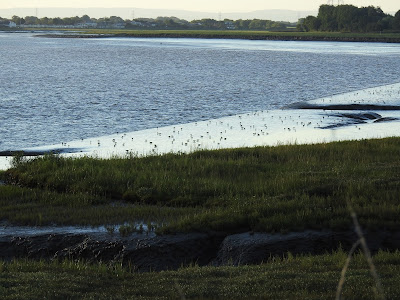 I enjoyed watching the Redshanks feed on the area of sticky mud revealed by the falling tide. This newly exposed wet, ever shiny in the rays of the rising sun, mud, was even a bit too soft and sticky for the Redshanks, and as they fed, they sank up to their knees.

It was interesting to observe their feeding action, and they were either probing more or less directly in front of them with a 'stabbing' action, or stretching their necks out and moving their bill from side to side over, or just beneath, the surface of the mud. I suppose it was a type of filter feeding.

I mentioned before about them sinking up to their knees in the mud, but sometimes they would sink up to their bellies, and the action of tugging their feet out of the mud led to a jerky, almost clockwork-like, walk across the jelly-like surface. It's amazing what you see, if you just take the time to watch!

After half an hour or so I had to give up on watching the Redshanks, as I was starting to suffer from 'mud blindness' as the bright sun from the east, reflected its early morning rays on the reflective surface of the wet mud.

I then changed positions and moved to the spit looking downstream towards the former fishing port of Fleetwood. The Lakeland Fells provided the backdrop to the mouth of the estuary, and stood exposed on the spit, I thought it wouldn't be long before there would be white caps on those Lakeland Fells, and I would be hearing the 'wink-wink' calls of Pink-footed Geese leaving their estuarine roost.

The wind was northerly this morning and it was cool, but not as cold as it would be here with those mountains covered in snow. But for now, it's still August, and the "...Season of mists and mellow fruitfulness..." is still firmly upon us. 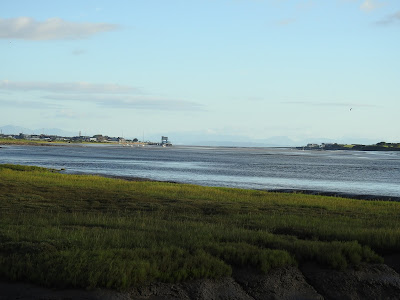 From the spit I added a few more Redshanks, sixty to be precise, and a flock of 41 Lapwings. My walk back to my car produced two Grey Wagtails heading southeast, a Linnet and six House Sparrows.

It's looking very unsettled for the remainder of the week, and it might be weekend before I venture forth again.
Posted by The Hairy Birder at 09:57