Yesterday Gail and I made the first visit to my Pied Flycatcher boxes in the Hodder Valley and the outcome was somewhat interesting!

There were two factors that were very obvious and a little alarming and these were the number of empty boxes, 16 out of 39, and the number of incomplete Tit nests. Out of 39 boxes this is what we found:

This is what we found on the 12th May last year; the exact same date:

Although this is just a comparison between the last two years it is nevertheless interesting to look at the details. Pied Flycatchers are occupying the boxes at the same number but at a different stage to last year. At this time last year based on the above I would say that there were 4 definite pairs of Pied Flycatchers (incomplete clutches + female incubating) and this year 6 (incomplete clutches). This could be a case of a slight increase in Pied Flycatcher numbers taking advantage of the increase in empty boxes this year; 16 this year, compared to 8 last year.

So why all the empty boxes this year and which species hasn't taken them up. Looking again at the above there is a distinct lack of Blue Tits. If we total up the boxes where there was some type of Blue Tit activity in a box this year and last year this equates to 8 in 2012 and just 1 this year. However, there are 6 boxes with incomplete Tit nests in this year and these may turn out to be Blue Tits, in which case numbers would be very similar to last year, but just a little later. Great Tit activity is similar to last year, so it will be interesting to see how the Blue Tits get on. It might be that they have started later to time the hatching of their young with those of canopy feeding moth caterpillars, so crucial for a number of woodland bird species survival. All interesting stuff! 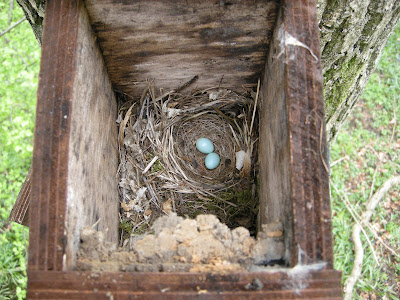 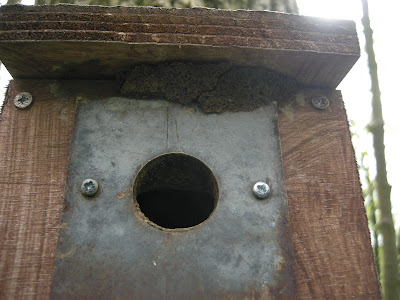 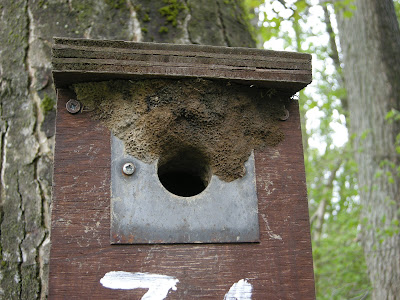 The actual box the Nuthatches were using 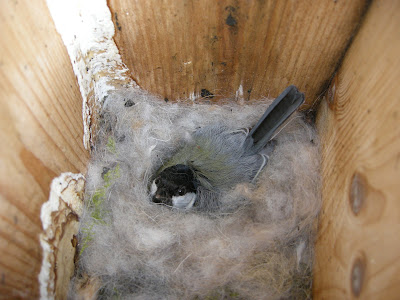 
Walking through the woodland checking the boxes we had several singing Warbler species including two Goldcrests, three Blackcaps, three Willow Warblers and a Garden Warbler. Other species recorded included a female Goosander on the river, 20 Siskins, a Jay and a Treecreeper.

So its all hanging on those Caterpillars! Lets hope the weather settles down :-)

Lets hope it does!