Amongst another bunch of recoveries from the BTO were details of one our Reed Buntings that I ringed at Fleetwood Marsh Nature Park (reedbed site) on 14th July 2012 that was controlled (caught by another ringer) at Kenfig Pool, Bridgend, South Wales on 2nd March 2013. See Google Earth image below. 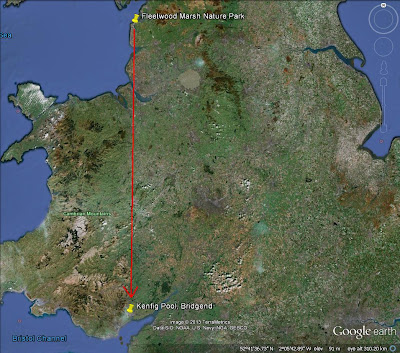 On the morning in question we trapped and ringed four juvenile Reed Buntings together that I assumed were all from the same brood. And as luck would have it I have a picture of this bird, or it's brother/sister, as I ringed two out of the four birds. See below. 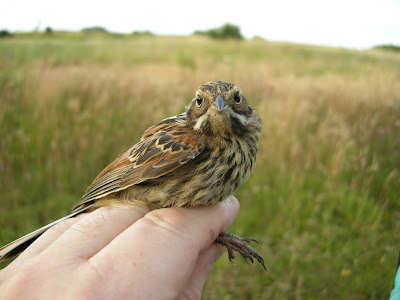 This bird travelled a distance of 270 km SSW to presumably spend the winter in South Wales. Of course it could have gone further and been trapped on it's way back north again. However, it is likely to have wintered at Kenfig as it is classic Reed Bunting habitat. In fact we have had a number of our birds controlled at Kenfig in the past, primarily Reed Warblers.

The Migration Atlas states that an analysis of movement distances between summer and winter was carried out by Prys-Jones (1977, 1984) and that 53% of movements between the breeding season and winter were of more than 20 km and 32% were greater than 50 km. The relatively small numbers of movements exceeding 50 km predominantly resulted in birds wintering in a southerly or southwesterly direction from their breeding grounds (Wernham 2002). This fits in exactly with our bird as well.
Posted by The Hairy Birder at 14:48