On Sunday Gail and I were once again on the nest box trail and our first port of call were our Tree Sparrow boxes on the moss. Due to weather restraints last weekend we hadn't managed to check them so this was the first visit and it had me scratching my head!

All fifteen boxes were occupied by Tree Sparrows but the puzzling aspect were the boxes with complete nests and no eggs or young and a couple of boxes with flattened nests as if the young had fledged! If this is the case then there is a huge amount of variability between boxes in terms of what stage of the breeding cycle they are at.

Seven boxes had young that were too small to ring and two boxes had full clutches of eggs being incubated. This means that next weekend there should be a few Tree Sparrow pulli to ring. The remaining six boxes were the puzzling ones, so it will be interesting to see what they're like next week. 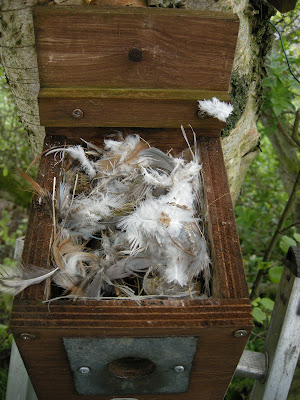 After the Moss we headed off to Bowland to our boxes in the Hodder Valley. We checked all 39 boxes and 17 hadn't advanced at all from the previous week e.g. still empty or still a quarter nest etc, so these will be dropped off next weekend's round. We had eight pairs of Pied Flycatchers incubating full clutches and I managed to lift two females off the nest; both were controls so it will be interesting to see where they have come from. A further two boxes had complete Pied Flycatcher nests in them that were empty last week, so potentially we could have ten pairs this year which would be a record. This is probably as a result of under-occupation by Tits. 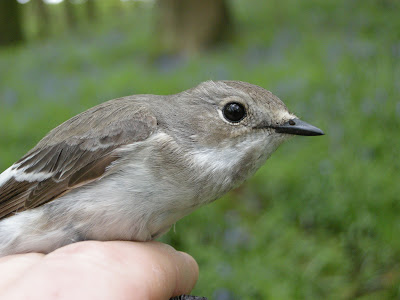 We had four boxes occupied by Great Tits, four by Blue Tits and a single box with six, too small to ring, Nuthatches in. So next weekend we will have the Nuthatches to ring and possibly up to eight female Pied Flycatchers to lift off the nest. Let's hope for some decent weather.
Posted by The Hairy Birder at 14:30

What were your controls, please?