We had two choices this morning; ring at the obs on the coast or head a little inland (half a mile) and try and catch some Acro's in the reedbed. We went for the latter, but regretted it after catching very little, but that's the beauty of hind sight I guess!

Huw, Ian and I met at 0445 but noted that it should have been 0430, ouch! We had 6 oktas high cloud with a 5-10 mph SSE wind. We put three nets in the willow scrub and reeds and waited expectantly. I must admit it 'felt' quiet as we were putting the nets up, but often it has felt quiet and we have caught well.

All we ringed were two Blackbirds and we recaptured two Reed Warblers from this site in 2011 and 2012. Interestingly the bird originally ringed in 2011 as a breeding male was not subsequently recaptured in 2012. 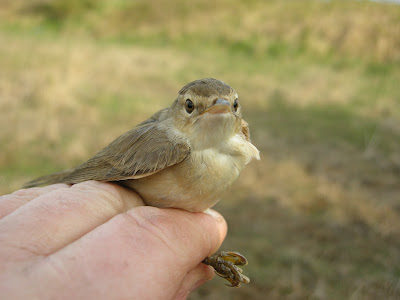 It was very quiet on the birding front with the only vis being a single Redpoll, four Swallows and two Sand Martins. A good selection of warblers were singing including single Grasshopper Warbler, single Whitethroat and approximately four each of Reed and Sedge Warbler.

After our early finish I had a quick look in the cemetery and had a grounded Chiffchaff, two Willow Warblers and eight Lesser Redpolls. Eighteen Lesser Redpolls headed north in the short time I was there as well as six Swallows, a Swift, a Linnet and four Carrion Crows.

Back home I checked my moth trap and all I had were two Hebrew Characters, a Herald and a Common Quaker. The forecast is looking okay for some birding before work so I'll have my usual stagger around the obs. 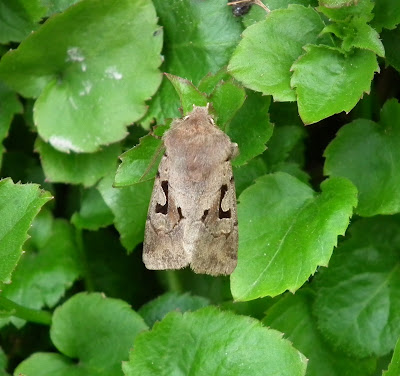 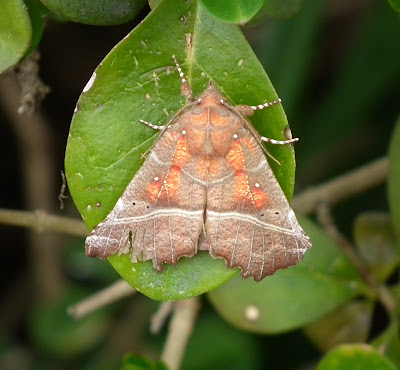 Herald
Posted by The Hairy Birder at 19:22