Amongst the batch of recoveries we received from the BTO recently was details of a Kestrel that we had ringed at Rossall School, Fleetwood, Lancashire as part of a brood of four on 7th June 2012. This bird had then travelled 281 km south to Felton in North Somerset and had unfortunately got itself tangled by it's wing in a building and very sadly starved to death. See Google Earth image below. 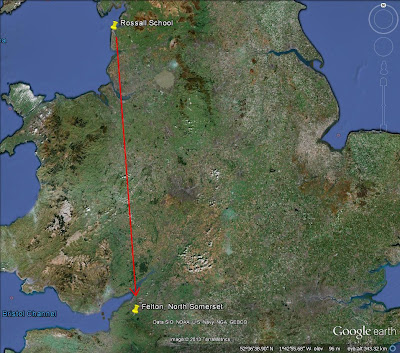 The Migration Atlas states that young Kestrels disperse from the nest from July onwards. Although most recoveries at this stage are within a few tens of kilometres of the birthplace (70% within 75 km), some are from much further afield. This movement away from the nest seems to be in random directions and some birds move very quickly (Wernham 2002).

This Kestrel certainly dispersed quite a distance and what we can't tell from the recovery details was whether it had travelled further and was it heading north again to Lancashire when it sadly died. From our own experience of ringing Kestrel chicks I can agree with the statement that they disperse in random directions as we have had birds dispersing north across Morecambe Bay as well.

Below is a picture of Ian ringing one of this brood of four and this could well be the bird that had a short but adventurous life! 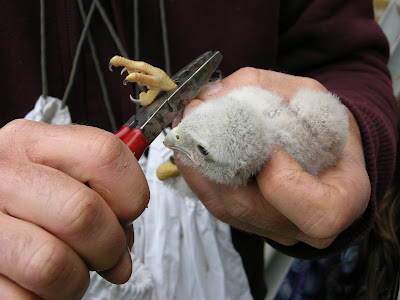