I returned to the obs for an hour and a half before work this morning, but yet again it was very quiet. I had full cloud cover and the wind was a 15 mph northerly, that veered NNW later on. It was too windy to operate mist nets so I did my usual circuit.

There were few birds grounded, just two Robins, two Wheatears and a Grasshopper Warbler. I say Grasshopper Warbler, when really I should perhaps say unidentified Locustella as I wasn't able to say which Locustella it was! However, we are on the west coast of England here and not in the Northern Isles so I am happy calling the bird a Gropper. As I walked along the central path I flushed the Gropper from some rank grassland underneath a wire fence. I couldn't get anything at all on it. It dropped down again about 10 metres further on and I flushed it again trying to creep up on it (no chance)! This went on a further 2-3 times and the bird then crossed over to an area of dry Phragmites and I gave up.

The only vis I had were two Swallows south and the sea was even quieter producing a big fat zero. As I 'pished' my way through the copse and back towards my car I flushed a male Sparrowhawk that dropped the prey it was carrying before flying off.

It will be Friday morning before I am out again and the forecast is showing that it will be too windy to operate mist nets at the obs. As the wind is forecast to be a stiff southwesterly and there is a morning tide it will be some sea watching for me. I'll let you know how I get on. 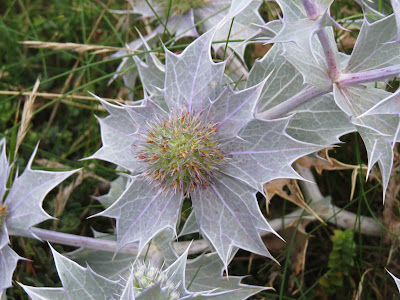 There was plenty of Sea Holly out but most of it was past its best.
Posted by The Hairy Birder at 14:12

Poor down the south-west, too, S

I'm glad it's not just up here then Errol!