Season of Mists and Mellow Fruitfulness

Don't worry I haven't gone all literary on you, but Keats's 'To Autumn' did pop into my head when I arrived at the obs this morning, particular the first two lines of the first stanza as it described the morning perfectly: 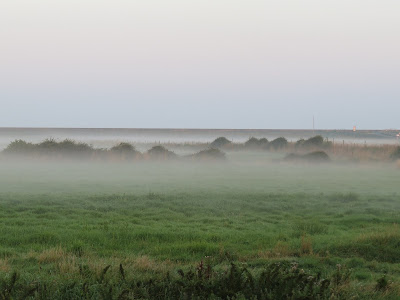 A view over the obs this morning

It certainly was a misty morning and the 'maturing sun' glowed a deep orange as it rose above the horizon. It's a pity that the morning from a birding perspective didn't equal the poetic qualities and atmosphere of the morning. Funnily enough Ian and Me had discussed at the Swallow roost yesterday evening whether last night was going to be a 'clear out' or 'arrival' type of evening and after a couple of hours it was very obvious that it was the former.

But let's rewind to yesterday evening when Graham, Ian and Me arrived at the Swallow roost to ring some more Swallows. As dusk approached we got beyond the time where we would normally be catching Swallows as they respond to the MP3 lure and no Swallows were arriving! It was obvious there wasn't going to be a roost so rather than hang on indefinitely we decided to take the net down. In the end a few Swallows roosted and I mean a few, perhaps as few as 60! So we had 8,000 on the 22nd, 2,000 on the 24th and only 60 last night!

What had probably happened is that the Swallows have switched to roosting in maize as I have noticed on a few farms this past week that the maize has had a growth spurt and is at the correct height and density to support a Swallow roost. We shouldn't complain because while it lasted at the obs we ringed 671 which is a cracking total compared to recent years and I am pretty certain that Swallow will remain the most numerous species ringed for the group in 2013.

Back to this morning. As you will have gathered it was very quiet at the obs and all I managed to ring was a single juvenile Dunnock! There was some vis and I had an Alba Wagtail, a Meadow Pipit, 26 Swallows, three Grey Wagtails and a Yellow Wagtail all head south. I didn't have any grounded migrants at all and based on the weather conditions I couldn't really expect any. 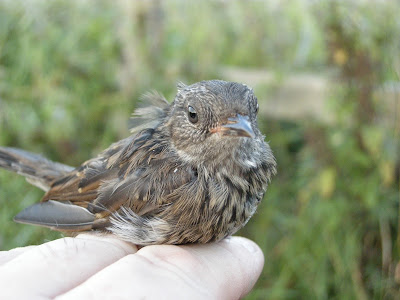 For the next few days it is going to be fairly settled so I will attempt a few ringing sessions at the obs  but unless I can pull some diurnal migrants down the ringing totals could well be meagre; I'll keep you posted.
Posted by The Hairy Birder at 15:15