Over the past two days I have been carrying out a bird survey in deepest, darkest Merseyside. Yesterday's survey was afternoon to post-dusk and today it was pre-dawn to noon.

The weather conditions yesterday afternoon and evening were 6 oktas cloud cover with a 5 - 10 mph southeasterly wind. The area has coniferous woodland, mixed woodland, broadleaved woodland and arable land in the form of over winter stubbles (spring cropping). The woodland areas held a mix of species including eight Goldcrests, two Buzzards, five Jays, a Siskin, three Redwings and 21 Long-tailed Tits.

In the more open farmland areas, of interest I recorded two Linnets, 30 Goldfinches and five Grey Partridges. The main feature of the survey was the Pink-footed Geese and I had 5817. Five thousand of these were birds flying over low at dusk heading to a coastal roost. Also at dusk I had a Great White Egret fly over with a Little Egret. 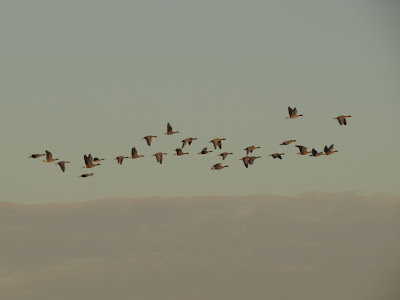 Fast forward to this morning and it was quieter than I expected. I did expect a bit of vis, and there was some, but only a handful of Redwings, 54 Fieldfares and 47 Skylarks. In the woodland areas were nine each of Goldcrest and Long-tailed Tit, plus seven Jays. Pink-footed Geese were a feature again with 1564 recorded. 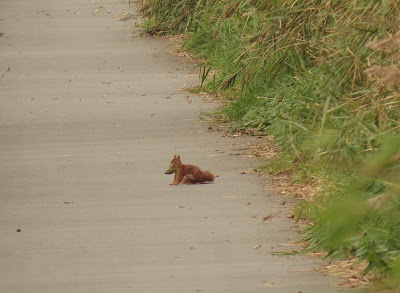 Red Squirrel. This little chap crossed the path ion front of me, but sadly
too far away for a decent shot!

I've got to feed on the Moss tomorrow, so it will be interesting to see if the Tree Sparrow numbers have built up or not.
Posted by The Hairy Birder at 20:54