I was back at the farm fields at the Obs yesterday morning and conditions were pretty good for ringing with 7 oktas cloud cover and a light northeasterly wind. However, as I was unloading my car in the darkness it was quiet, no calling Thrushes and my immediate thought was "Hello"!

Nets were put up and MP3 players switched on and over a couple of hours all I ringed were one each of Wren, Greenfinch and Reed Bunting! It was time to pack up and go home.

There were a few grounded migrants around in the form of five Robins, two Song Thrushes, four Long-tailed Tits and a Reed Bunting. 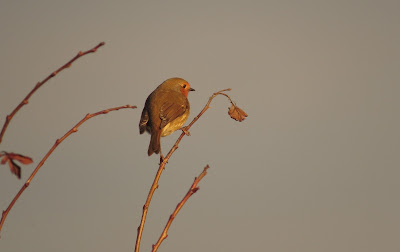 There was some vis, although it was light, and I had birds going both north and south. I had Chaffinches, Goldfinches and Bramblings going both north and south, but the majority of the other stuff went south. My totals in the short time I was observing were a Redwing, 104 Jackdaws, ten Goldfinches, 29 Chaffinches, four Greenfinches, eleven Bramblings, eight Carrion Crows, 100 Pink-footed Geese, 14 Skylarks and two Mistle Thrushes. The only raptor I had this morning was a single Kestrel.

I've got bird surveys to complete in Merseyside early in the week, then a couple of days at a local beer festival later in the week, so it might be towards the end of the week before I get back out on the patch!
Posted by The Hairy Birder at 14:56