This morning Ian and I had a ringing session in one the reedbeds at the Obs. Our aim was to target some of the Reed Buntings that move through in late autumn. It is quite interesting to watch them drop in, feed up for a while, and then climb high out of the reeds and head south. I was also hoping to see the two Bearded Tits (male and female) that Ian had ringed here yesterday. 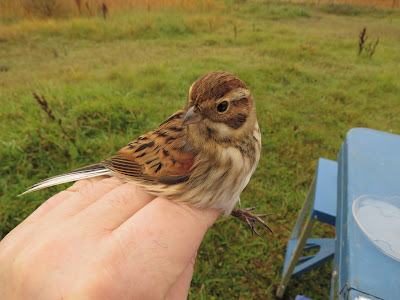 With the clocks going back an hour last night we decided to meet at 6:00 a.m. and get some nets up quickly in the dark and see if we could catch a few Thrushes as well. As I unlocked the gate just before six we had full cloud cover with a very light southwesterly wind.

We accomplished our target and ringed both Reed Buntings and Thrushes. We ringed 29 birds as follows: 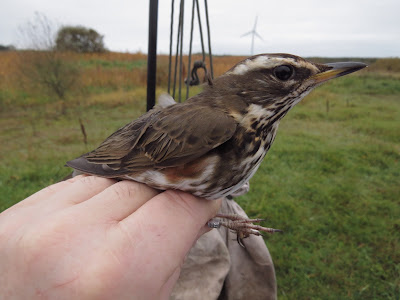 There was actually five Bearded Tits on site (1 male and 4 females), and as we only caught and ringed one female, we don't know whether these were an additional five to the two from yesterday. We have some more ringing sessions planned this week targeting roosting Alba Wagtails, so it will be interesting to see if the 'Beardies' stay around. 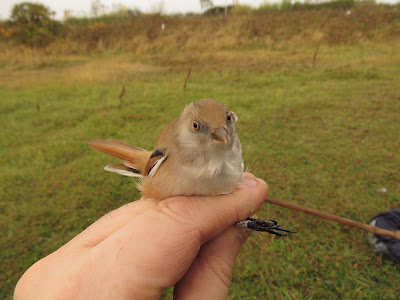 The Starling roost on the other side of the hill seemed to have a good few birds in it and at least 20,000 birds exited the roost! There was some vis, difficult to observe here, in the form of seven Fieldfares, 30 Redwings, a Brambling, two Siskins, eight Chaffinches, four Redpoll sp., eight Meadow Pipits and 42 Skylarks. Other 'odds and sods' included a Cetti's Warbler, at least 60 - 70 Alba Wagtails exiting the roost, a female Sparrowhawk, two Buzzards, a Great Spotted Woodpecker and 35 Wigeon over. 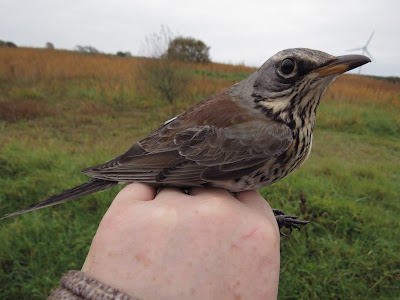 It would seem that autumn's not over just yet!
Posted by The Hairy Birder at 18:54