You Have To Try

With these easterly winds coming from along way east, even here on the west coast you have to try! I headed out this morning with full cloud cover and a 10 mph easterly wind. There had been bits of rain overnight and I was hopeful for a few grounded migrants. I only had a short amount of time so I headed to the cemetery first.

Sometimes you get a feeling straight away that it was quiet and that's the feeling I got this morning. Sometimes you are proved wrong, but not this morning! From a grounded perspective all I had at first were seven Robins and a Goldcrest. Further round on my walk I came across some Rowans heavily laden with berries and here were seven Blackbirds (some continental), two Redwings and a Song Thrush; so a few more grounded migrants, but only a few.

On the Thrush front I also had two Mistle Thrushes which was nice as they have become scarce here over the years from when they were once fairly common. It used to be a common site in the cemetery to see a family party of Mistle Thrushes, but not anymore. 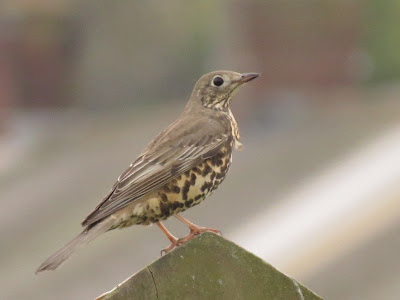 As I was driving past the marine lakes on my way to the coastal park I noticed some Turnstones feeding in the area that we catch them, so I decided to pull in and see if I could see any of our leg flagged birds. There were seven or eight leg-flagged birds, but every time I would get focused on one to read the leg-flag they would get flushed by a dog walker. In the end I just read two; AH and AY. AH was ringed on 23rd January 2012 and was last observed on 29th January 2014! AY was ringed on 16th December 2012 and was last observed on 8th March 2015. In total there was 167 Turnstones roosting here over the high tide period.

The coastal park was just as quiet as the cemetery with two Goldcrests and two Song Thrushes! It's going to remain easterly until early next week so I'll just have to keep on trying!
Posted by The Hairy Birder at 15:07