Mid Winter on the Estuary

It was dry this morning and quite cold so I decided to spend an hour or so on the estuary before returning home to wrap presents!. I had very little as I walked down to the estuary other than a Grey Heron that lifted from the field in front of the pools.

The wind was southwesterly and quite strong, perhaps 25 mph, as I walked across the saltmarsh to my vantage point where I could see up and down the river. Even though high tide wasn't due for another four hours the tide was 'running in' and gently 'lifting' some of the waders and wildfowl. 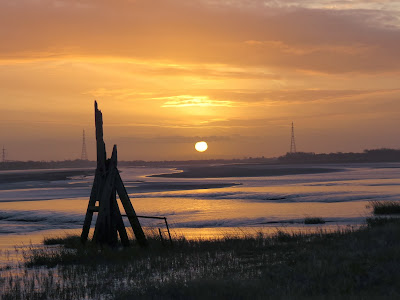 Sunrise over the estuary

Lapwings totalled 416 and Golden Plovers 290, and as the tide continued to run in huge numbers of Lapwings were pushed from the far northeastern side of the estuary too far away to count accurately. On the water and mudflats were 566 Teal and 113 Wigeon, and on the saltmarsh fringes 717 Pink-footed Geese. In addition to the Golden Plovers and Lapwings the only other waders that I had in any decent numbers were 200 Dunlins. 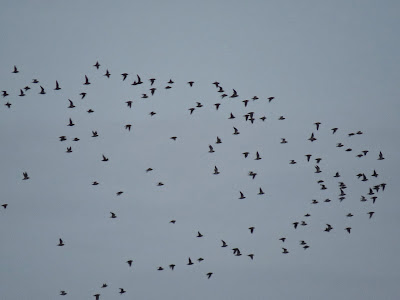 Passerines were few and far between with just two Rock Pipits and four Goldfinches encountered on the saltmarsh. I headed back to the embankment and had a look on the pool and widlfowl numbers were restricted to three Goldeneyes, eight Tufted Ducks, three Little Grebes, a Pochard, 17 Coot and two Mute Swans. The only raptor I had this morning was a Kestrel. 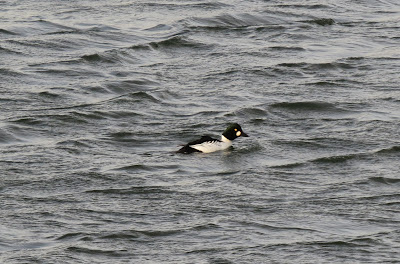 I'll be back at my feeding station tomorrow and I wonder if I can better my count of 237 Tree Sparrows from yesterday; I'll be sure to let you know. Only one more day until the return of the sun!
Posted by The Hairy Birder at 12:55