I headed to the Point this morning but due to an episode of trying to make a flask of coffee with frozen milk I didn't get there quite as early as Craig and Ian and consequently missed a Bonxie by three minutes!

The wind had dropped from yesterday and this morning it was a steady 20 mph-ish west-southwesterly with about two oktas cloud cover. High tide was at 0645, so it was a case of watching the sea over the falling tide.

It wasn't a bad winter morning's seawatching, but I must admit I did expect a few more Little Gulls and Kittiwakes than the 14 and 17 that I had respectively. Auks numbered just a single Guillemot flying out of the Bay and two Auk sp. flying in to the Bay. I had a respectable nine Great Crested Grebes flying out of the Bay, but only two Red-throated Divers flying in.

One of the most interesting sightings was that of an adult Gannet flying west close inshore that had some dark patches on its belly as if it was slightly oiled. If it wasn't for the fact that I had a full cup of coffee in my hand I might have been able to grab my camera from my rucksack and taken a picture!

Wildfowl were represented by seven Eiders (all male), 30 Teal, a Wigeon, three Red-breasted Mergansers and six Common Scoters (two males and four females). The only waders that I counted were the 46 Oystercatchers, 250 Sanderlings, Grey Plover and ten Turnstones that included one of our leg-flagged birds. A juv. female Merlin flying just over the surf stirred the waders up a bit and Ian informed me that she has been around for a few weeks taking waders! She must have acquired a liking for Sanderling!

After the storms of the past week or so and particularly after the strong winds of yesterday large numbers of Starfish were wrecked as the tide dropped and the Gulls were having a feeding frenzy on them. Mostly they just swallowed them whole and some times washed them in some water first before knocking them back; presumably to provide some lubrication. What was interesting was the fact that there seemed to be more juv. Herring Gulls feeding on the Starfish than adults. The Gull species involved were Herring Gulls, Lesser Black-backed Gulls, Great Black-backed Gulls and Common Gulls. Just directly in front of us were at least 400 Herring Gulls on a relatively small area of shore and looking in the wider area there must have been four or five times as many as this. 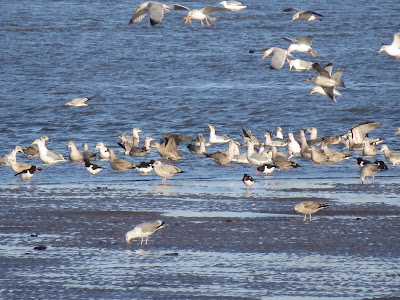 Herring Gulls feeding on Starfish. If you look carefully at the Herring Gull
centre top, you can see it carrying a Starfish.

The forecast is for it to be fairly dry and a touch breezy (too breezy for ringing unfortunately) tomorrow, and as there's a morning tide it'll be some more seawatching for me.
Posted by The Hairy Birder at 19:54