With an impending Turnstone catch tomorrow I headed to the Lakes to put some extra food out for the Terries. Ian has been doing a sterling job feeding them daily and fingers crossed we should be able to fit some more leg flags tomorrow!  There were about a hundred birds present and amongst them were at least four (there will have been many more) leg-flagged birds and four metal ringed birds without flags. I'll let you know how we get on. 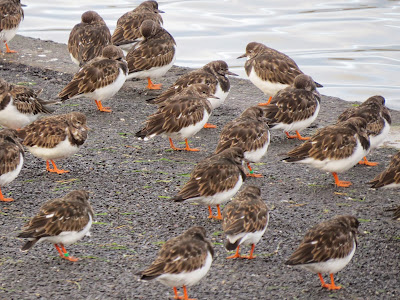 Also on the Lakes were a pair of Goldeneyes and six Red-breatsed Mergansers. I then headed to the Point to have a look on the sea. It was very quiet with just 45 Cormorants, 26 Common Scoters, five Eiders, five Auk sp., two Great Crested Grebes and a Red-throated Diver that flew west close in shore!

I'd better shoot and get all my gear ready for tomorrow.
Posted by The Hairy Birder at 18:51

I hope the catch goes well for you tomorrow. From Findlay

What food do you use to attract them?

Great picture of the Ruddy Turnstones.

Thanks Findlay, but unfortunately it didn't!

We use a mixture of chicken pellets, dried mealworms and a broad spectrum bird seed Barry.

Thanks David. I must give that a try to see if it helps my catching rate!