I always think the word 'pricked' is a poor, bordering on cold casual, word to use for a bird suffering with a shot gun wound destined to die a slow lingering death from starvation if it isn't finished off by a predator first! At my feeding station today I could see a 'pricked' Pink-footed Goose in the adjacent field that was running along a hedge, flapping it's damaged wings in the futile hope that it might get off the ground.

Now I'm not anti-shooting per se and have friends that shoot, but as in all walks of life there are some 'cowboys' out there that don't do things properly, and when this is applied to shooting some poor creature reaps the consequences and suffers at the hand of some 'cowboy's' incompetence! They shouldn't be taking the shot unless they are 100% confident of killing the bird outright.

Other than the aforementioned pathetic creature it was quiet at the feeding station mainly because it was bucketing it down and blowing a hoolie, and all I had were two Yellowhammers, 53 Tree Sparrows, six Chaffinches and five Blackbirds. Driving home as I crossed the bridge over the estuary I had a Peregrine fly over which raised my deflated spirits after the episode with the 'Pinkie'! 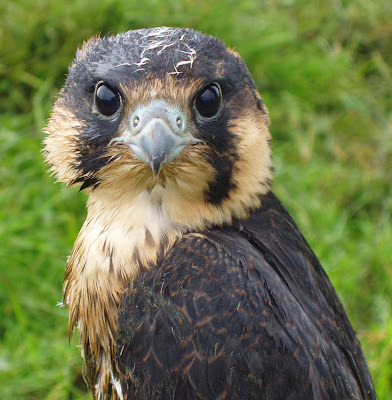 Peregrine
Posted by The Hairy Birder at 15:04