I had a change of plan this morning because I needed to go to my feeding station to feed the ravenous Tree Sparrows and therefore didn't get to the Point to seawatch. It was a glorious morning for a wander on the Moss and I was joined by Gail in the clear sunny skies.

Driving on to the Moss we passed the flood where the Green Sandpiper has been semi-regular and sure enough it was on the flood this  morning. I reversed my car so I could get my camera out of the boot without flushing it as I wanted to take some pictures in the perfect light conditions. However, when I pulled forward again the Green Sand had gone! I did have a bonus though in the form of a calling Chiffchaff from some leylandii.

At the feeding station the number of Tree Sparrows weren't at their peak and all we had were 74 plus six Yellowhammers, eight Chaffinches and four Reed Buntings. 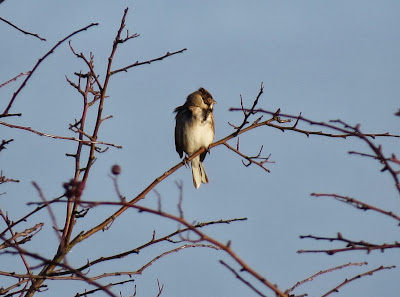 As we headed up the '97 Hedge' two Buzzards flew from the woodland and 61 Pink-footed Geese flew overhead in three small skeins. Two Brown Hares made an appearance and we also had another mammal species in the form of three Roe Deers. 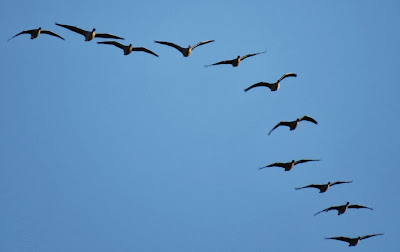 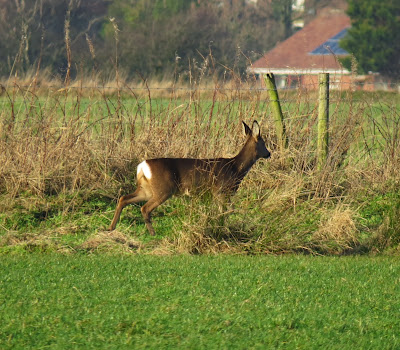 As we headed towards the plantation I picked up a male Hen Harrier to the east. It was 'hawking' over some permanent pasture alongside a reed fringed ditch. On several occasions it would land in the field before taking flight again. Eventually it shifted gear and belted west across the fields. Unfortunately it was always fairly distant and the two shots below are just record shots. A little point about record shots as mine really are record shots. I read some blogs where the author/photographer will say "below is a record shot of the blah-blah-blah bird" and low and behold is a full frame, pin-sharp shot! 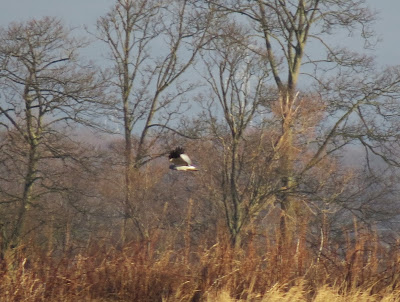 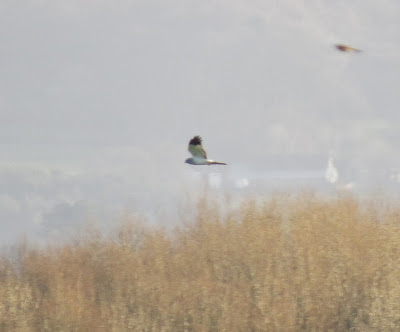 The plantation didn't reveal much other than a Jay and on the walk back to the car we had a family party of eight Whooper Swans that headed south, then east and then back west towards where we first picked them up.

It's forecast to be fairly wet and windy tomorrow morning, but I still might have a look on the sea as there's a morning tide.
Posted by The Hairy Birder at 19:20

Record shot or not mate, its a great species to get an image of ! :-)

So tomorrow we will see sea pics?

And I wish I had your record shots of that beautiful bird.
Take care, and all the best for 2014, Gordon.

Thanks Warren and Gordon and all teh best for 2014.

No sea pics I'm afraid Lily as I didn't make it to the Point as the weather was awful. However, I should be there New Year's day whatever teh weather!