Across The Irish Sea

Before we head across the Irish Sea I attempted to head across Rawcliffe Moss this morning but was thwarted by the weather. Just as I set off down the track to the feeding station loaded up with a bucket of seed, apples, peanuts and niger seed it started raining!

Yellowhammers were back in reasonable numbers and I had 19 at the end of the hedgerow. Five Fieldfare over was good compared to recent weeks and I wondered whether birds wintering further east were now starting to filter through. Down at the feeding station itself Tree Sparrows numbered 214 accompanied by 23 Chaffinch. The rain continued and I dutifully replenished the feeders and headed off the Moss.

Fieldfare
My reference to crossing the Irish Sea is not a return to my homeland but to a couple of Chaffinch controls we received in the latest batch from the BTO. Both were juvenile females ringed in Will's garden at Claughton and both had been recaptured on the Calf Of Man at the bird observatory (see Google Earth image below). The dates don't really give any clues; the first bird was ringed on 30/12/10 and controlled on the Calf on 11/10/1,1 and the second bird was ringed on 4/9/11 and controlled on 23/10/11. It is possible that the second bird was heading further west to winter in Ireland when it was intercepted on the Calf. 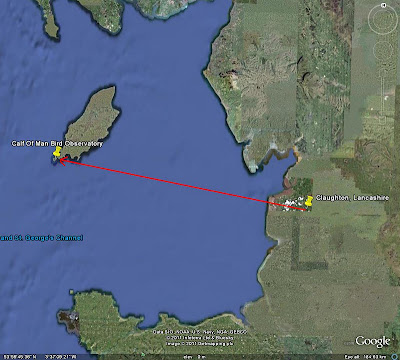 The first bird was obviously wintering in Lancashire in 2010 based on the date when ringed and then in 2011 could also have been on its way to Ireland to winter. Some Chaffinches show evidence of winter site-fidelity whilst others do not. Presumably our first Chaffinch is one that doesn't.

Allegedly it is going to be dry tomorrow, so hopefully I can get out for an hour or two in the morning. I always like to get something in my notebook on Christmas Day! Talking of Christmas Day; Seasons Greetings to all my readers and I hope you have a prosperous and wildlife filled 2012.
Posted by The Hairy Birder at 20:47

And don't forget ... today, Crimble Eve is the shortest day of the year light-wise. Just think ... longer birding days are not far off ;-)))

Good point Ron. I can't wait for those longer birding days. Merry Christmas to you and yours!

Merry Christmas from Cheshire.
I hope you have a wonderful day.

Thanks Andrew. Anda a belated Merrty Christmas to you too!