A Net Full Of Terry's

From now on I will always think of Turnstones as 'Terry's' as that was what Ian was calling them this afternoon when we were trying to ring a few! Craig, Ian and I braved the weather this afternoon for a second attempt to catch some Turnstone at Fleetwood. There were no men racing model boats today so the birds were fairly settled.

We set the net up and liberally sprinkled mixed bird seed (an unusual choice of food for Turnstones I know; but they love it) in front of it and sat back in the car and waited. Slowly, but surely, the Turnstones worked their way in and as soon as they were close enough we fired and caught ten birds! We were pleased with this as it means that we can catch them, so the next stage is to start colour marking them. 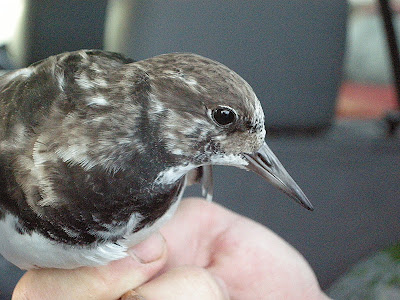 Turnstone
Turnstones are amber listed in the UK and globally their IUCN red list category is that of 'least concern'. The overall population trend for Turnstones is decreasing and it is for this reason that we are interested in colour marking them.
Posted by The Hairy Birder at 19:30