A Brief Change Of Scenery

I called to see some clients this morning that have now become friends and to have a look at the wetland on their farm near Nateby, or the 'flood' as they like to call it. As I walked down to the flood a Redwing called overhead and this is the first one that I have had for a while.

The Flood
The flood looked in fine fettle but it was fairly quiet. There were 71 Teal, 2 Moorhens and 8 Mallards. As I walked back up to the yard I had a single Kestrel. I then went onto my feeding station and when I arrived at the track I could see Phil's car parked so I knew he was having a wander on the moss. 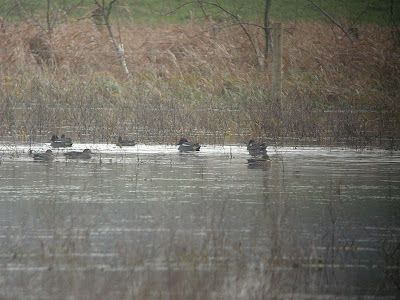 Distant fuzzy Teal
As I walked down the track a Brown Hare got up from the field next to Curlew Wood and I saw a further 3 in stubbles in the 'big field'. Talking of mammals I had 8 Roe Deer this morning; two groups of 4. Having said recently that I hadn't seen any for a while I am constantly 'tripping over' them now!

As Phil had already walked past the feeding station the numbers of birds present were lower than normal  because it is impossible to walk past it without disturbing the birds. I had 108 Tree Sparrows and 12 Chaffinch. There were also 3 Yellowhammers and later when we were back at the cars a flock of 15 dropped in.

As usual I headed up the '97' hedge and there were 10 Reed Buntings feeding along the ditch and margin. As I headed on to the top fields I had 12 Corn Buntings go over. As I headed south across the stubbles I had three Fieldfares over and a single Linnet.

After I got back to the car I decided to have a look in the wild bird seed strip alongside Curlew Wood. There were about 30 Chaffinches dropping in from the wood to feed but nothing else. I bumped into Phil here and we headed back to the cars. As were having a natter and a catch up the ring-tail Hen Harrier appeared over a stubble field to the west of us and it was immediately mobbed by Crows. In fact they harassed it mercilessly and the Harrier had to climb high heading east over Curlew Wood. A few minutes later it had shaken off the Crows and was quartering the stubbles of the big field.
Posted by The Hairy Birder at 17:43