What A Difference Some Snow And A Couple Of Days Make

Since my last visit to the feeding station we had some snow yesterday, not a great deal but obviously enough to make a difference to the number of birds on the moss. I stopped by the barn to put my wellies on at a clean bit of concrete yard and I heard a Kestrel alarm calling. It was dive bombing something perched on top of a telegraph pole and when I looked with my bins I could see it was a Buzzard. The Buzzard wasn't phased by the Kestrels antics at all and very soon the Kestrel gave up.

There was some lying snow, but not a great deal, but just enough to cover the area I put seed down apart from where the birds had kept it clear through feeding. So it was here that I dumped the seed down today. Only one Yellowhammer this morning and at the feeding station were 149 Tree Sparrows and about 15 Chaffinch. 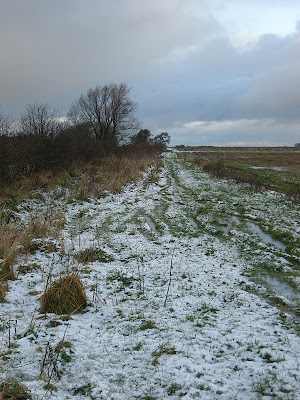 A light dusting of snow, above and below 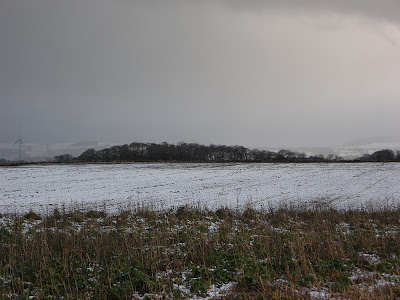 In the field behind the feeding station a flock of about 4,000 Starlings fed and I had 171 Pink-footed Geese go over. I headed up the '97 hedge' and had 5 Blackbirds, single Song Thrush and a further 10 Chaffinch. Out on the stubbles were 83 Skylarks and I had 126 Lapwing feeding on a flooded field. 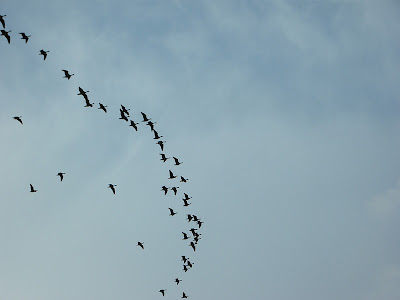 Pink-footed Geese
As I headed towards the wild bird seed plot I could hear a Raven croaking, but couldn't see it, and two Roe Deer headed towards the 'top fields'. Only 9 Reed Buntings today and a Great Spotted Woodpecker called from Curlew Wood. I like to vary my route around the moss and today I headed south to have a look round the bottom fields but all I could add were two Brown Hares, two Grey Partridges and a single Snipe.

One of the recoveries we received recently from the BTO was of a Coot that Craig ringed as part of Kane Brides colour ringing project. Craig ringed the Coot at Marton Mere LNR on 10/09/2010 as a 1CY male and it was re-sighted at West Kirby on the Wirral on 21/08/2011. Please see google earth image below. 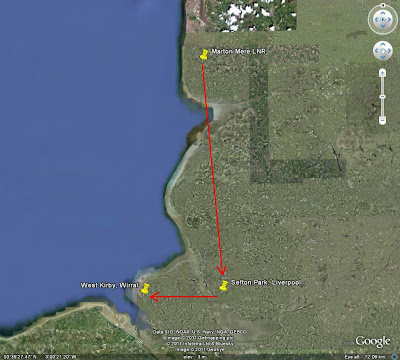 You can only speculate about this birds movements. Had this bird hatched in the Wirral area in 2010 and it had returned to its natal area to breed? In December 2010 this bird was sighted in Sefton Park, Liverpool; so only more observations will help to answer this.
Posted by The Hairy Birder at 17:59

And we complain about here in the south, that is working with the cold ...
Congratulations Seummus for that recovery. Fernando.