Continuing with the batch of recoveries we received from the BTO recently one was an intriguing Yellowhammer movement. A Yellowhammer that we ringed at Moss House Farm on 23rd January 2010 was found dead 40 km NNW near Stribers, Cark in Cumbria on 20th April 2011 (see Google Earth image below). The bird was found as a skeleton and was only identified by the fact that it had a ring on one of its legs. 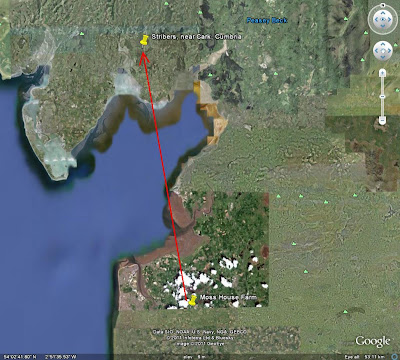 The Migration Atlas states that the sedentary nature of the Yellowhammers that breed in Britain & Ireland is clearly evident from the recoveries. Regardless of season, 95% of birds were recovered within 25 km of where they were ringed, and the median distance is less than 1 km. Some longer-distance ring-recoveries suggest a winter movement towards the coast or lower ground (Wernham 2002). It is possible that this bird had been wintering at Moss House Farm and had returned or was returning to its breeding area when it died. Interesting and intriguing!

It's going to be dry tomorrow, but still breezy, and as my ravenous hordes of Tree Sparrows will need feeding it will probably be some more tales from the moss tomorrow from me. I refuse to get my hopes up but XC weather is suggesting that there might be a window in the weather for some ringing next Tuesday (27th). Fingers crossed!
Posted by The Hairy Birder at 18:17