Mid Afternoon On The Moss

I had to go out and buy some presents for her indoors this morning for the dreaded 'C' word, so it was this afternoon before I got to my feeding station to top-up. At last it wasn't raining and the wind had eased. In fact the wind might ease enough for a ringing session tomorrow; fingers crossed.

As I headed down the track 3 Yellowhammers flew in front of me and then at the feeding station itself I had 240 Tree Sparrows with about 25 Chaffinch. I put a couple of small niger feeders (need to make a few more) out yesterday morning in the rain and already there is Goldfinch using them.

Goldfinch
I then headed up the '97 hedge' and immediately had the 'ring-tail' Hen Harrier hunting low over the 'big field'. It dropped onto the 'deck' and stayed there until a Grey Heron flew by and flushed it. A number of Lapwings were moving around this afternoon and I had 245 in varying flock sizes.

There weren't as many Skylarks on the big field, only 15, and along the 97 hedge I just had 6 Reed Buntings. I headed north towards the plantation and had two Grey Partridges near the maize strip. It was very quiet in the plantation, but as I skirted the top of it a Woodcock flew fairly high from it to the Pine Wood.

Heading back towards the car 400 Woodpigeons headed southeast to roost and as I drove off I had my only Corn Bunting of the afternoon perched on top of an Ash.

One of the recoveries that we received recently from the BTO was of a Reed Warbler that was ringed at Moss House Farm as a 3J on 28/07/2010 and it was controlled 26 km to the south on 03/07/2011 at Mere Sands Wood, Rufford as a breeding male (see below). It is likely that this bird hatched somewhere in the region of Moss House Farm and then in the following year it had set up territory at Mere Sands Wood. 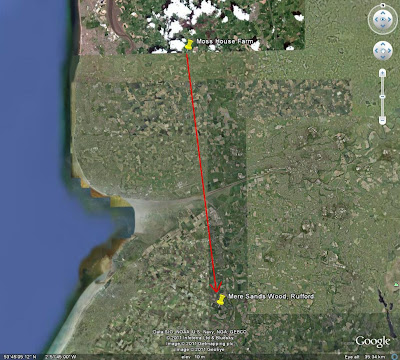