No Gulls and No Turnstones

Armed with dried mealworms, bread, a turkey carcass and goose giblets, Craig, Heather, Ian and I met at Fleetwood to try and catch some Gulls and Turnstones. We set the whoosh net up in the half light, put out the bait, and waited. Unfortunately for us there was some kind of model yacht competition on the boating lake and as the tide ran in the Turnstones appeared but they kept getting flushed by the 20 or so men walking up and down with their remote controls directing their yachts!

The only birds brave enough to come in and feed were a few Starlings and we tested the un-tried whoosh net by catching seven Starlings! Not what we had come out to catch, but we felt fairly confident that if the 'model yachters' hadn't been there we would have caught some Gulls and Turnstones. 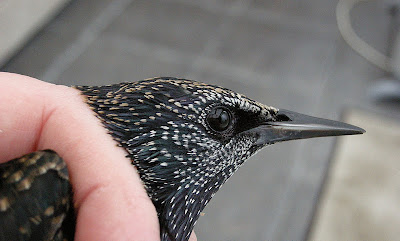 Starling, but not from today

Later on in the morning we noticed a steady passage of Woodpigeons high up and heading west; in total we had about 500 birds.
Posted by The Hairy Birder at 18:38