Unfortunately I didn't manage to get out yesterday, not that I am a huge fan of Christmas, it was all the dashing round to friends and family that ate into my precious time. This morning Gail and I headed to the feeding station for some fresh air and to have a look at what was about, or not, on the Moss. It wasn't the most pleasant of mornings for a wander, but at least we were out.

Tree Sparrows were a little thin on the ground with only 88, but it could have been the conditions keeping them low as there was a good 20-25 mph southwesterly wind. Four Yellowhammers and 11 Chaffinch kept the Tree Sprogs company.

In the windy conditions we decided to shorten our walk to an amble up to the top fields and back. Heading along the '97' hedge 20 Skylarks were in the 'big field' and 7 Reed Buntings along the ditch. Two Buzzard flew low in the windy conditions, but no Hen Harrier today. At the Badger Sett we had 2 Song Thrushes and as we walked across the wild bird seed plot the Short-eared Owl got up and dropped into some stubble.

Heading back we added three Corn Buntings, a pair of Grey Partridge and 200 Lapwings flew over heading west.

One of the recent recoveries we received from the BTO concerned a Greenfinch that we controlled at Rossall School on 13th October 2011. This bird had been ringed the year previously at Walney Bird Observatory on 1st November 2010 18 km north on the other side of Morecambe Bay.

We have 'controlled' a few Greenfinch at the 'obs' from Walney and it is likely that this bird has passed over the 'obs' last year, although we didn't catch it. It would be good to have some more records of onward passage of 'our' Greenfinch, but other than a bird controlled in Merseyside this is yet to happen. 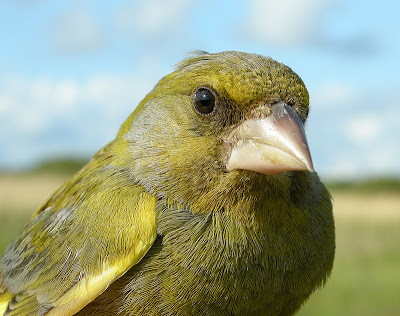 Greenfinch
Posted by The Hairy Birder at 19:21