We received a batch of recoveries from the BTO this week and rather than bore you with all of them I thought that I would share them with you one or two at a time. In addition to the recoveries from the BTO, Ian had a colour-ringed and leg-flagged Sanderling at Rossall Point a couple of days ago and it was this recovery that I wanted to share with you first.

Ian saw the Sanderling at Rossall on 15th December 2011 and the bird had been ringed at Hochstetter Forland in northeast Greenland. See the google earth image below. 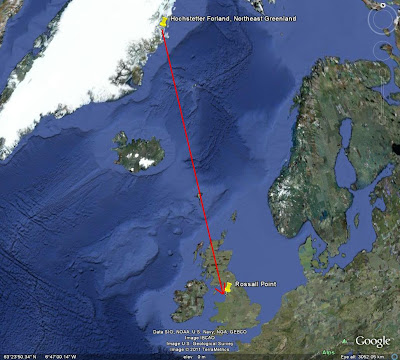 Ian reported the bird to Jeroen Reneerkens from Holland who co-ordinates a colour ringing project on Sanderlings. This Sanderling had been ringed on 16th July 2011 and Jeroen's comments paint a vivid picture. "The bird was ringed in northeast Greenland last summer. It's partner was ringed two days later and two of their chicks were ringed that were guided by the bird that you observed". Awesome! 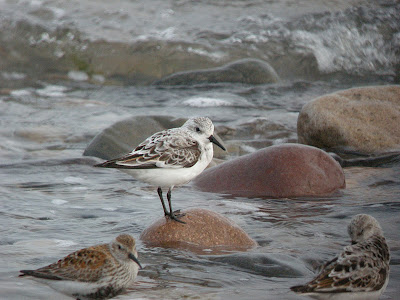 Sanderling
This is the second colour-ringed Sanderling that Ian has had at Rossall this year. The other bird that Ian had he observed at Rossall on 25/08/2011 and this bird had originally been ringed at Sandgeroi in Iceland on 23/05/2007 and had sunsequently been observed back there again on 21/05/5008 and 28/05/2009 before being seen at Rossall.

It is likely that the latter of these two Sanderlings was passing through Rossall on its way to wintering grounds in West Africa and the former bird observed this week is probably wintering at Rossall , if not somewhere in Liverpool or Morecambe Bay. Fascinating stuff!
Posted by The Hairy Birder at 12:51