More Farmland Birds But Not As Many

Funnily enough I had been asking Phil whether he had seen any or many Roe Deer on the moss recently as I hadn't and when I drove down the track a Roe Deer ran in front of me as if just to prove they were still around! It was blustery as I headed down towards the feeding station with a Kestrel round the buildings and Buzzard alongside Curlew Wood.

I had two Grey Partridges again but only 6 Yellowhammers. As I approached the feeding area I could see a Great Spotted Woodpecker on one of the peanut feeders and 110 Tree Sparrows flew off towards the hedgerow next to the wood.

I had a walk along the '97 hedge' and on to the wild bird seed crop. Reed Buntings were a little more numerous and I counted 20 as I walked the margin alongside the hedge, but Chaffinch numbers had dropped to 231. I had 4 Corn Buntings on my walk and 20 Goldfinch had joined the Chaffinch. 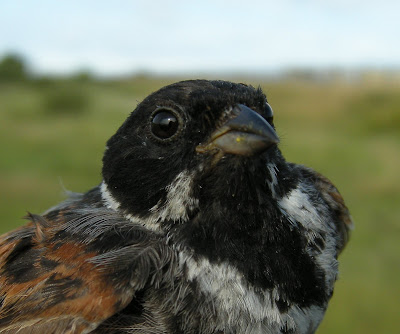 Reed Bunting
Two Lesser Redpolls flying over were a little unexpected and the 10 Skylarks lifting off the 'big field' weren't. Something flushed the Lapwing from the adjacent field and I counted 103. So overall it was a morning of diminishing returns, but no less enjoyable.
Posted by The Hairy Birder at 19:46